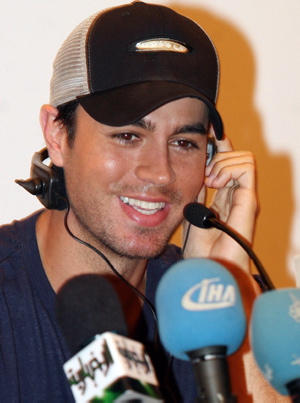 The singer wants to spread his music far and wide, including the make-believe world of daytime television. More and more singers try to put their music out there using every bit of broadcast they can; but you could ask yourself what is Y&R. This is CBS’ “The Young and the Restless.”. That is using every outlet.

The 32-year-old Latin heartthrob will sing “Somebody’s Me” from his new CD, “Insomniac,” on the Nov. 7 episode. “Music has changed so, so much,” he said after taping his appearance Thursday. “It’s tough out there, so you need any outlet to put your music out there.”. He performs at Indigo, the jazz club owned by Neil Winters.

The singer’s other TV credits are the CBS comedies “How I Met Your Mother” and “Two and a Half Men.” He is interested in expanding his acting. The latino singers do have an interest in acting.

“I love sitcoms,” Iglesias said. “It was different from the daily thing that I do. I want to do little things and learn.”. Iglesias begins a world tour next week in South Africa, followed by dates in Europe before hitting the U.S. next year.