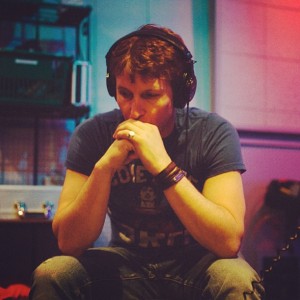 I’m sure if any of us searched the dusty corners of our musical memory banks, we’d find the unmistakable and unforgettable lyrics to James Blunt’s breakout hit ‘You’re Beautiful.’ The catchy track that earned him a #4 spot on Billboards top songs of 2006 list.

Well if you’re one of those people whose been living in 2006 for the past seven years, you’ll be excited to know that James Blunt has returned. His new single entitled ‘Bonfire Heart’ made its debut early morning yesterday on BBC Radio 2, along with its lyric video shortly after. At first listen, you’d think you’re hearing some amazing acoustically driven, feet stomping Mumford track, but Blunt’s tender boyish voice gives the charade away. ‘Bonfire Heart,’ a light hearted, sentimental look on life and finding the spark that ignites that lovely little thing called love, not only showcases that the British singer-songwriter has what it takes to be a relevant artist in the present of 2013, but has also reached a new maturity through his lyrics.

No longer is he the “one hit wonder” singing of heartbreak and pretty girls, he has evolved into something deeper than that, and I think we can expect great things from the rest of his album Moon Landing due out Friday, October 18th. Until then, call up some friends, start up a cozy fire and relax to  this fresh tune.

Young writer/music junky from Winnipeg, Manitoba (That's in Canada). I play, eat, breath, and dream music. It is an all consuming passion for me. If you like what you read let me know.

View all articles by Stephanie Starodub