I caught Duncan Brookfield at The Troubadour Club in Earls Court the evening after what had been a warm but cloudy day in the city. Please excuse my weather forecast, but the mood of the day captured Duncan’s sound perfectly. He began with ‘Hurt’, a song which started slowly and immediately showed off the warmth of Duncan’s voice and the poignancy of his songwriting, however as the song progressed and the rumble of the drums came in, it became a blur, a ‘cloud’ if you will, but in a way that totally fitted.

He moved into his second song, ‘Cloud 9’, the only song that I had previously heard online, and impressively he brought the majestic production of the recording to his live set. Chords dripping with reverb, reminding me somewhat of Foals’ ‘Spanish Sahara’, open the song and then are joined by electronic drums. It’s hypnotic, and prepares you for the soar of the chorus where he cries ‘Do I have to lay out all my cards?/And all my options for you darling?’. The meaning is ambiguous, but it sounds like one final cry of despair within a tortured existence. Maybe slightly hyperbolic, but it hit me hard. 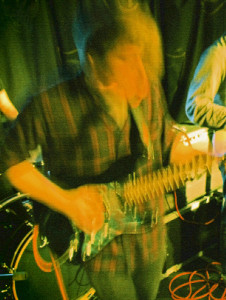 The highlight of the set for me was ‘Eden’s Garden’, which opened with the lyric ‘What has become of you my friend?/I’ve never seen the bitterness/I cannot comprehend’. This lyric again cries despair, but in a much more direct way. It crescendos into a shoegaze like climax of distortion and washy guitar, and the despair he is putting across lyrically is matched by the intensity of the music. The performance was a triumph.

Chatting to Duncan after his set, he told me that this was his first gig with his (excellent) backing band, and although it was a brilliant set, I wasn’t surprised. There was a little tension in Duncan’s mannerisms on stage, such as looking down at his microphone or guitar for just a few seconds too long, and awkwardly apologising maybe one too many times for the technical difficulties he was experiencing. I can only assume that this came from pure nerves, and all that aside it was a fantastic first gig, and I look forward to seeing him progress with his songwriting, and simply loosen up a little on stage!