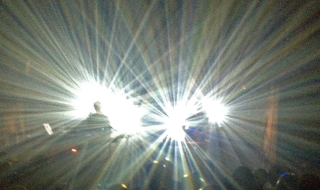 I first heard Aquilo about 6 months ago with the track ‘Part Of Your Life’. It was part of a delicate EP released shortly afterwards, which shows exactly how pop melodies can be crafted into a soundscape of unadulterated bliss. I was immediately excited after hearing this and since then have been looking forward to the time I would see them live.

Coming from the Lake District, this was their first London show, which they humbly expressed between songs during their set. The venue was St. Pancras Old Church, which as well as being acoustically brilliant is still a functioning church, so it was a surreal setting. They began and immediately the audience was entranced, which was helped by the darkness and hypnotic white beams of light exploding round the church. They moved through the set swiftly, the standout song for me being ‘Part Of Your Life’, but maybe that’s just because it’s the song I knew best – all the songs were brilliant in their own right and it was hard to believe that they have played as few gigs as they have. ‘I Gave It All’ also stood out, and this is another favorite of what I have heard of them online.

Confident as they seemed in their delivery, it was between tracks that their inexperience was more noticeable. They finished each song with a shy ‘thank you’, and more often than not said nothing else before going into the next. This was slightly endearing though, and was made up for by their noticeably extraordinary musicianship, both of them switching between guitar and an array of keyboards and synths, building the tracks with just as much detail and accuracy as on the recordings.

Although the set was short, I felt like it was just a taste of something more to come. I left the church feeling maybe not holy, but definitely privileged in knowing that I had just witnessed the beginnings of something remarkable.