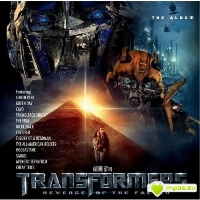 I would love to give this CD a horrible review. I’d really, genuinely enjoy ripping apart its poxy devotion to dated post-grunge sludge rock. Or better yet, going on a bloodthirsty, rampaging rant about how the Transformers franchise as a whole has gone from being a treasured reminder of an entire generation’s youth to encapsulating everything that’s wrong with modern cinema (“Cars! Robots! ‘Splodes! Wait, where brain go?”) It would be easy – not to mention fun – to tear down, to mock, to deride this soundtrack: it’s the soundtrack to a couple million overgrown children literally wetting themselves over Optimus Prime. Idiots.

I could, for example, point out that Nickelback appear on this soundtrack. Forget how singularly awful, soul-destroying and suicide-inducing the band’s albums are, and instead notice that they appear on the soundtrack to every sub-par summer blockbuster, dating back as far as 2003’s Daredevil. Although at least on that soundtrack, all they did was slaughter an Elton John classic – here, Chad Kroeger infests the album with his own particular brand of empty-headed, poseur ass-ery. I’m not a big proponent of the word “douche-horse”, but whatever image the word conjures up for you, Kroeger undoubtedly defines it. (Actually, I lied a little there – I love the word “douche-horse”.) But no! That’s not important. Not now.

Also unimportant is the fact that the middle section of the soundtrack sags so much it starts to resemble a life-size rubber model of Jabba the Hutt from the Star Wars films if you slowly melted it over a spit. It’s like a convention for all the bland, faceless radio “rawk” bands you could possibly imagine. From genre stalwarts Staind to the abysmal All American Rejects, and all the way back to Nickelback-lite, a.k.a Theory of a Deadman, it’s a veritable parade of mediocre, vague depression. (Actually, if you listened to tracks 3 through 11 – and I in no way recommend that you ever do – you’d be forgiven for thinking it was the work of a single, somewhat schizophrenic band, flopping around in desperate search of a personality. And a tune.) Even Hoobastank show up to rock out a little, sufficient time apparently having passed since the impossibly poncy “The Reason” destroyed any notion of testosterone in the members’ bodies.

And it’s hardly even worth mentioning Avenged Sevenfold’s cheery contribution, “Almost Easy”, tinged with confused angst as it may be, because that’s also insignificant. (Sample lyric: “I left you bound and tied with suicidal memories/Selfish beneath the skin/But deep inside I’m not insane”. Um… what?) Although I have to admit that the song did lead me to two important conclusions: I’m too old to listen to metal without laughing uncontrollably, and life’s too short to listen to Avenged Sevenfold. Did I mention that The Fray are on here too? I probably shouldn’t – the most interesting thing I can say about them is the fact their singer has an odd munchkin-like face that wordlessly invites punching. And I only know that because they were Conan O’Brien’s musical guests the other night – you don’t even get the grim satisfaction of seeing the guy’s face here.

Possibly worth noting is the fact that Green Day contribute one of their more recent reworkings of “Boulevard of Broken Dreams” (here entitled “21 Guns”) which drifts along in a boring mulch before developing into a fun chorus lifted directly from Mott The Hoople. And Linkin Park throw in a song, frenetically advertised as “written especially for Transformers 2”, but more than likely a discarded take from the Minutes to Midnight sessions. Tolerable, but no: not especially noteworthy.

Oh, and Cheap Trick tie the CD off with an oddly bored rendition of the classic Transformers theme song. That the song could be so devoid of energy or fun is doubly surprising: for one thing, it’s the Transformers theme! And secondly, it’s Cheap bloody Trick! So that was disappointing.

And now, here’s the “but” you’ve been waiting for this entire review.

None of that matters; not a jot. Because this, despite its deceptive appearance, is not an album. It’s not even really music.

Bear with me; I know that sounded ridiculous. But really, this isn’t an album in the way that – say – Fred Neil’s Bleecker & MacDougal was an album. It’s not even an album in the way that the Now! compilations are albums. This isn’t music for people who love music; it’s not music for people who, bless their hearts, actually like Nickelback or The Fray or even Taking Back flapping Sunday. This is music for people who saw Transformers 2 and wanted to buy some licensed products. It’s robot merchandise in disguise. It’s focus-grouped and tailored and catered towards an audience that couldn’t give a flying rat’s tailbone about the music that’s on the CD, and get more excited about the still movie shots that litter the album sleeve. It’s not going to satisfy a serious fan of music, and it’s not designed to.

Which is fine, but unfortunately, it casts it outside my steely critical gaze. As merchandise, I’m sure this does an admirable job of keeping the Transformers-transfixed proles happy, but I’m sure they’d be equally happy with a Bumblebee action figure with moving parts, that has a small button on its chestplate that, when pressed, prompts the toy to sing a mechanised rendition of “Metal Guru”. And come to think of it, I’d probably prefer that. And if you have a problem with that, well, you’re just a douche-horse.