The Honda Civic Tour has struck again – for the 10th year in a row, as a matter of fact!  This year, the annual pop/punk/hip-hop/rock show is featuring the headlining acts Blink-182 and My Chemical Romance, with an ever-changing selection of supporting bands.  When the show went rolling through Detroit, my concert-going city of choice, they brought along dance-punk-indie-pop duo Matt & Kim to warm up the crowd.

Sadly, I wasn’t able to dance to Matt & Kim’s indie-pop-punk beats, because I was busy working with the environmental group Reverb to earn my keep at the show.  Still, I managed to get an excellent glimpse of what their live show must be like, as I’ll get into later.

Since I missed the opening act, our story is going to start at the beginning of MCR’s set; that is, it’s gonna be loud, fast, and out-of-breath.  I ran up the enormous slope that is DTE Energy Music Theatre’s lawn to see them start the show, and managed to find a spot just as they launched into “Na Na Na (Na Na Na Na Na Na Na Na Na),” the first song off their most recent album Danger Days: The True Lives of the Fabulous Killjoys. (Is it just me, or do they seem to have a thing for excessively long titles?  Not that I mind, of course.)  Anyway, it was an excellent song to start the night with, thanks to its gritty sound and carefree attitude.

As their set continued, they did a pretty great job of mixing up their newer and older material; for every song off  Danger Days, there was a classic from one of their past three albums.   Their performance was pretty tight, and it seemed like they were happy to be there.  On-stage movement was a little lacking, but that’s not really an enormous revelation; they’re pretty serious about musical precision, and sometimes that means giving up a tiny bit of movement.  Still, I’d like to see Gerard Way move around a bit more…I had a support beam between myself and the center mic, and I didn’t see him at all.  However, he still put on an incredible performance, as did Ray, Mikey, and Frank.  Their new live drummer Jarrod Alexander gets extra-mad props, considering he’s only been playing with them since September 4th!

Their show was really quite amazing to be at, because all of their fans seemed to be so into their performance.  During “Teenagers,” I swear half of the sold-out venue was screaming along with every line; I know I was, anyway.  The most beautiful and emotional part of their set came a little later, though, and it was a one-time event.  The show took place on the 10th anniversary of 9/11, which was in and of itself pretty significant.  My Chemical Romance started a week after the attacks, as an attempt to deal with the tragedy in the best way they could.  The first song they ever wrote is called “Skylines and Turnstiles,” and is all about their feelings concerning what occurred.  They played that song, but far more stripped down than the album version: it was just a quiet piano and Gerard, with an entire concert-full of people holding lighters and being silent.  It was pretty freaking powerful, and I think they handled it tastefully.

Of course, they couldn’t end the show on that note!  They finished up the night with a high-energy performance of their breakthrough hit “I’m Not Okay (I Promise)” that brought down the house.  It was an excellent way to end their show, and a great bridge into Blink-182’s set. 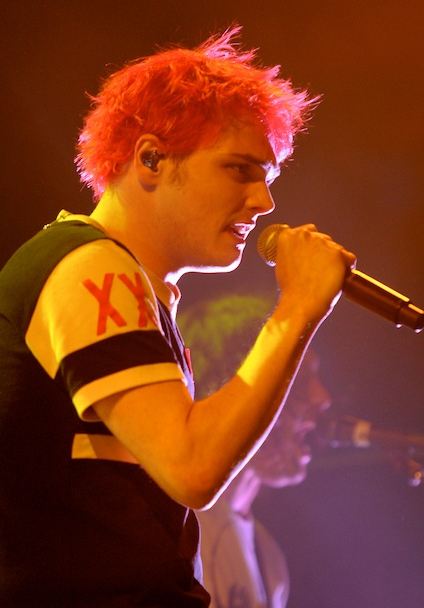 When Blink came on, the house ERUPTED in cheers and applause.  The majority of concert-goers were there to see them, and seemed happy to be done waiting.  They launched into their first song “Feeling This” right away, with fans shouting along.  That was pretty much the whole show, actually: hundreds of die-hard fans, having the times of their lives.  I like Blink-182, but I’m not familiar enough to have joined the other fans in their joy…looks like I’ll need to get a-listening so I’m better prepared next time!!

The singer/guitarist, Tom DeLonge, was really quite ill, which was a shame.  He looked ROUGH every time the cameras focused on him, but he pulled through and put on as good of show as he would for any other city.  The biggest problem, other than the fact he was physically ill, was that his voice was completely shot.  They only played around three songs that he sang alone on, but he definitely needed the fans’ help on each one.

Actually, they made a pretty sweet work around for Tom’s lack of voice; for two of his songs, the previous two singers to grace the stage came back out and performed guest vocals.  First up was Matt (his last name is Johnson, but is it necessary for someone in a band named after them?), who looked overjoyed to be onstage with Blink-182.  He sang “Always,” and ran around the stage the entire time with the goofiest happy grin on his face.  Kim came out to join him, and booty-danced with Tom and bassist Mark Hoppus for the entire song.  They were so freaking happy looking, and it came through the song wonderfully.

Next to be invited back onstage was Gerard Way, who handled the song “First Date” like a  boss.  Honestly, I could barely tell he was singing it; that’s how close it was to the original.  After he ran off stage immediately upon completion, Mark and Tom went on about how “pretty that guy is.”  Their fans might not have agreed with them, but I kinda have to!  Some of the Blink-182 fans seemed kind of hostile towards MCR, but I know Blink didn’t support that behavior.  They seemed happy to be working with Gerard and Co., and I’m sure the feelings were reciprocated.

The best part about Blink-182’s set was their banter between songs.  Those guys seem like great friends, and poked fun at each other the whole night.  Even though he was sick as all get-out, Tom still held his own when it came to comebacks.  Travis Barker hopped in a few times from behind the drumkit, and the three of them were a hilarious combo.

They “finished” their set with the song “Josie”, but announced that we had to stick around or else we’d all miss something cool.  Was it time??  Time for the flying drumkit??  Turns out, it was!!  They dropped a curtain over the stage, and blacked out all the lights as they got everything ready.  Then the lights burst back up and Travis was lifted off the ground with his drumkit, riding a hydraulic rig that would swing him out over every pavilion seat in the house.  He went into a crazy solo, with Mark and Tom rapping back down on stage.  It even tilted him forward, so he was hanging in by a few straps and drumming down onto his kit.  Pretty sweet to watch!  I can’t imagine even being up that high, let alone playing up there…that’s gotta take some skill, for sure. 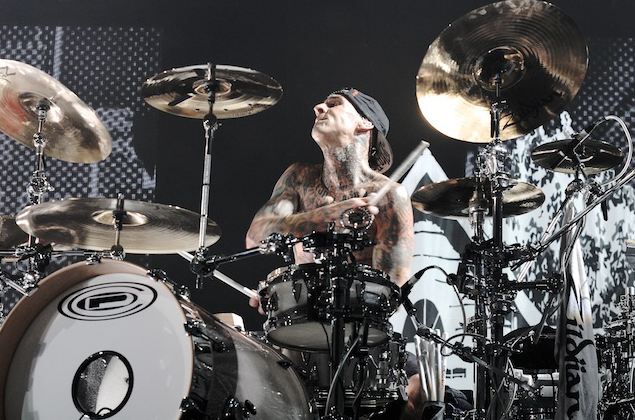 All in all, it was an excellent show put on by some excellent bands.  This was my second year attending the Honda Civic Tour, and in my experience it’s getting better each year.  They really seem to know what they’re doing when it comes to organizing an awesome show.  The bands acted like they were truly excited to be at the show doing what they love, and I believe they were.  If the tour is headed your way soon, I’d say it’s definitely worth checking out! This goes double if they are playing in Blink’s hometown of San Diego because they always break out something special for home. Blink has inspired many rising artists to seek out lessons from institutions such as TakeLessons guitar teachers in an attempt to capture an original sound like Blink-182’s.