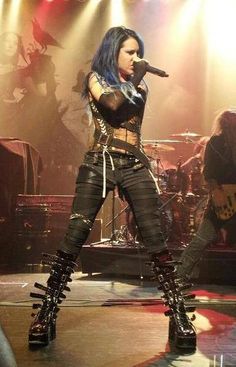 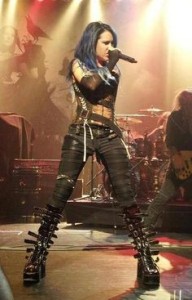 The newest Arch Enemy singer, Alissa White Gluz shares her thoughts about being vegan and animal rights in a new interview for Peta2. In the interview she talks about how she was actually raised by vegetarian parents and started being vegan since the age of 13:

Although we just scratch the surface [in this interview], the reason I’m so passionate about living vegan is because it benefits the environment (fauna and flora), humans in other parts of the world, animals and my own health.

I’ve been vegan for 15 years now and I have yet to find a lifestyle that gives as much back to the planet. The way I see it, I am lucky to be alive and well and I only wish the same for others.

If you have a hard time understanding what it’s about, please do some research on your own when you have the time. The facts are there, it’s just a matter of accepting reality and choosing to be a part of the solution instead of the problem.

It seems that Alissa is not only vegan but she is also against painkillers and other drugs. Earlier this month she was actually injured on the stage and also broke a rib, but continued touring with Arch Enemy even if she was in pain. Find more about it here!

The former The Agonist singer, became the frontwoman of the well-known melodic death metal band, Arch Enemy, after Angela Gossow announced her retirement  from the music industry. Find more about it here!

Check out the whole interview below!

In the past few months the band released three videos for songs from their newest album, War Eternal, which was very appreciated by the fans. You can check out below, Arch Enemy‘s latest video for No More Regrets. Enjoy!