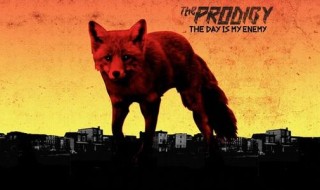 The Prodigy – The Day Is My Enemy album artwork Source

The well known English electronic music band decided to share their newest video for one of the tracks from their upcoming album. Wild Frontier is one of the fifteen tracks from the The Day Is My Enemy album which is set to be released on March 30 via Three Six Zero Music/Warner Bros Records.

Last month on January 12 the band also released a cartoon video for their first single from their newest album, Nasty, which can be watched at the bottom of the page.

The follow-up of the 2009’s Invaders Must Die is already available for pre-order on iTunes and will give you an immediate download for three of the tracks. Below you can check out the album’s full tracklist:

The video shares a story of some huntsmen that are killing animals in the woods being killed by one of the mutant animals themselves in the end. Maybe this will have a more profound meaning than I see but personally I don’t like movies or videos where animals are killed. But you might like it and even see the meaning behind the whole idea of the album.

Also the song sounds quite simple, maybe because I was expecting it to sound more like Invaders Must Die which is one great album of them, but I’ll just wait for the other songs in order to come up with an opinion about the new Prodigy sound.
Enjoy the video for Wild Frontier below!

Also check out the video for Nasty!