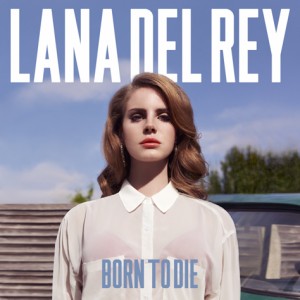 I’m sure you’ve heard Lana Del Rey’s name floating about the music scene for a while now – but it is only recently that her songs have drifted into my ears in a chilling way. This is especially weird as she has actually been on the music scene since 2008, but not under “Lana Del Rey”. You may have heard of her as “Lizzy Grant” – her real name. With this name she released “Lana Del Ray A.K.A. Lizzy Grant”; however it was removed for purchase shortly after due to the label not being able to fund it and new management. It became known as the “lost album” but is apparently going to be re-released. But let’s get back onto her new album.

But listen to the upbeat strings and soothing melodies and you seem to forget this and bring yourself back to the absolute importance: that this album is definitely a masterpiece, especially in my eyes. The twang of the 1950’s runs throughout the very first song “Born to Die”, the slow relaxing drawl of Del Ray’s voice will definitely put you in a daydream. But what song featured on this album doesn’t?

The strum of the strings in “Blue Jeans” and catchy rhythmical lyrics will keep you listening on. But not every song is cut from the same kit; we see a change in the album in the song “Off to the Races”, with a much more upbeat and kick-start blend, Del Ray’s vocals are also less calming, in a different pitch and excitable – keeping you up with the diversity of the album.

If you listen to the lyrics of some songs you begin to wonder how inspiring this girl can be and how easy they all fit together. “And I’m off to the races, cases of Bacardi chasers, chasin’ me all over town” from “Off to The Races” sounds just perfect with her sassy and carefree voice. “This is what makes us girls, we don’t look for heaven and we put our love first” from “This Is What Makes Us Girls” makes me think this is what I would like to hear. “Can we get it now low, down and gritty, do you think we’ll be in love forever?”  Drawls from “Diet Mountain Dew” sounds like something most girls imagine. I’m sure many people can relate to Del Rey’s lyrics, because they make sense in an inspiring and moving way.
It’s not just the lyrics that make me wonder about this album. Is it me or is too perfect to not be manufactured? They know what we like so they give it to us – but in a subtle way. Either way, I don’t care if it is; it is still a stunning success for music. We can see that she is not just a one hit wonder. Lie down, go for a drive, relax… Born To Die will put you in a trance and make you imagine yourself in Del Rey’s American dreams – A top album from a top new artist.