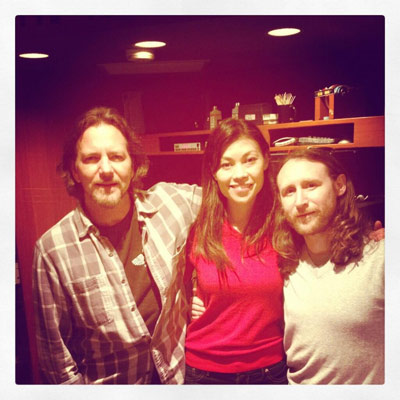 Incubus guitarist Michael Einziger has revealed that he is working on the new Pearl Jam album. We found this out (how else ?) from his twitter, where he posted:

“In the studio with my girl and Eddie Vedder, recording strings for Pearl Jam’s new album.”

I’m really curious about this Pearl Jam album, apparently it will be a little different than what they’ve done. Guitarist Mike McCready has described it as a cross between punk rock and Pink Floyd:

“I would say as a cliché answer it’s kind of a logical extension of what ‘Backspacer’ was,” says McCready, “but I think there’s a little bit more experimental stuff going on. There’s a Pink Floyd vibe to some of it, there’s a punk rock edge to other stuff.”

The band has already finished seven songs, and is working on 15 more. The album is being produced by the band’s long time collaborator Brendan O’Brien.

Meanwhile, McCready himself has been working on a side project – a supergroup which will also feature former Guns N’ Roses member Duff McKagan and former Screaming Trees drummer Barrett Martin. So far, there’s no name for the supergroup.