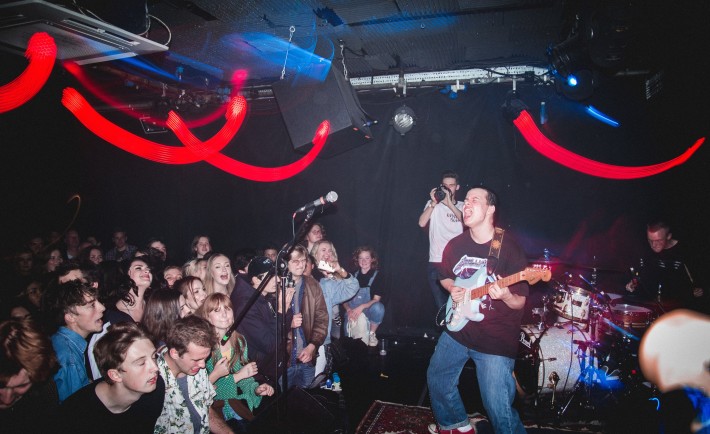 ‘How you been? Have you told your mother about me?’, sings Rex as he opens his set at The Barfly in Camden on Sunday. I’ve been well thanks, and yes, yes I have. In fact I’ve told pretty much everyone I know about you since you dropped your album last month.

Rex, also known as Alex, released his first track back in June, ‘Corduroy Dreams’. It’s a croony lazy love song full of wit and depth that far surpasses his age of 17. He followed this up last month with an 11 track album titled ‘bcos u will never b free’, a stunning snapshot of a teenager on the cusp of adulthood, encompassing all of the questions, confusion and heartbreak that being at such an age brings.

After discovering such a relatively unheard gem I was excited to hear that he was playing a headline show in Camden. I enter as support Cosmo Pyke is playing, it’s an intelligent jazzy set full of punk energy and he holds the crowd well. Its obvious when he finishes though people are there for Rex. As the lights darken, the room fills and we are graced with a playback of Nothing’s Gonna Change My Love for You by Glenn Medeiros. Though obviously played ironically, it was actually the perfect intro to the set that followed.

He comes on sporting a Metallica t-shirt, again I sense irony here, and it brings so much to his performance. His second track, Paradise, pays homage to artists such as Stevie Wonder and D’Angelo, however firmly being Rex’s sound. In the second verse he jumps off the piano and grabs the microphone to rap; incredibly this looks like the most natural thing in the world for a white boy from Surrey. Its clear that he knows himself better than most 17-year-old musicians ever could. Lyrics such as ‘see the reason why they did not understand you in school/same reason why you tell yourself you’re not cool’ and ‘onto the fourth but you still cant see why they would want to drink this/cold/branded/bottled/fizzing piss’ are both thoughtful and relatable, and evoke emotions that every teenager feels but most wouldn’t put into words.

He plays a track that he introduces as a new one that’s not on the album. The beginning sounds distinctly like the intro to Easy Easy by King Krule (which unfortunately some big mouthed cunt in the crowd took it upon himself to shout out), but when the verse kicks in you forget the similarity instantly. He gets the crowd to sing along to the lyric ‘you’re gonna wanna be my best friend baby’, a lyric and tactic that if anyone else used would be cheesy, but thanks to his incredible musicianship and inoffensive exterior, it’s simply endearing and works well. With regards to King Krule, there are a lot of influences obviously taken from him by Rex, and his sound would fit in well alongside him and other artists that are coming out of South East London at the moment such as Jamie Isaac and MC Pinty. However, in Krule’s music there is such despair, and such self-loathing at times. Rex is like a King Krule filled with hope, a youthful optimism rather than weary pessimism.

He ends his set with a poem; a bold move for a gig so early on in his career considering the room is primarily made up of teenagers. Of course the crowd hang on his every word though, and it’s as thoughtful and direct as expected.

He ends up playing an encore; a cover of Can’t Take My Eyes Off You, and again the audience love it and he leaves the stage to a room of absolutely thunderous cheering and applause.

The night has been fantastic, and he’s proved himself to be an inspiration to any lost teenager and simply remarkable to anyone older. If this is what he’s coming with on his first release, without a label or even a manager, it’s incredible to think what his future holds.

Listen to ‘bcos u will never b free’ here: