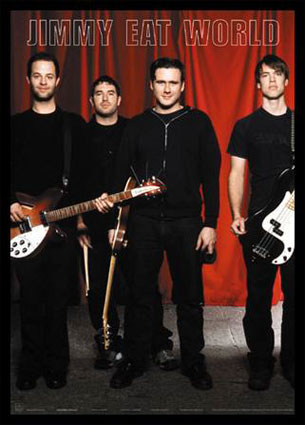 The band came together in the early ’90s and they were one of the first bands making that sound, which became known as “emo.”. So they have a tight thing with this genre or subgenre.

The Arizona-bred group of sensitive rockers spent more than a decade crafting and recording their hard-core, dark side of life tunes –paving the way for bands such as Alexisonfire, and [tag]Fall Out Boy[/tag]. They are going to release Chase This Light, their sixth CD and they say that it is a lighter theme than their usual work.

The drummer says that “We were bouncing back our experiences in making albums and touring, most of that period was difficult and frustrating,” talking about the band’s early days it was natural for them to gravitate towards darker-sounding music and lyrics.

They spent most of the mid-1990s trying to carve out a place for themselves in mainstream music. The band broke into the mainstream in 2001 after recording Bleed America, (re titled Jimmy Eat World after the Sept. 11 attacks), the album went platinum. The band worked with famed rock producer Butch Vig (producer for Nirvana, Smashing Pumpkins and member of Garbage) on Chase This Light so their release sounds worth listening to.