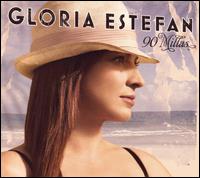 The artist which split from Miami Sound Machine in 1989 has some memorable hits but her most noticeable efforts are her Spanish-language ones. The fact that that language is not understood by everybody may haunt her but it may also bring more fans. It is a two way knife.

90 Millas, is no exception from that and it is in some ways a follow-up to “Mi Tierra“, which was her first to be sung entirely in Spanish and an instant, best-selling classic. They are both albums from and for the heart and they both have influences from Cuban music; they both benefit from the work of some of Latin music’s most gifted instrumentalists, many of them legends. 90 Millas features an impressive lineup of musicians including Papo Lucca, Johnny Pacheco, Candido Camero, Paquito d’Rivera, Nelson González, Andy García, Sheila E, Carlos Santana, Orestes Vilato, Israel “Cachao” López, Generoso Jiménez, Giovanni Hidalgo, India, José Feliciano, Arturo Sandoval, Sal Cuevas, and Luis Enrique. Not just those. The album’s lead single, “No Llores,” alone features Carlos Santana on electric guitar, José Feliciano on acoustic guitar, Sal Cuevas on bass, Sheila E on timbals, and Luis Enrique on congos and bongos. Talk about a huge lineup. It also boasts an ace production and songwriting team: husband/impresario Emilio Estefan (of course) and the Gaitán Bros. (Ricardo and Alberto).

The album is a very good one; the bad thing is that with that lineup it should be a huge thing. Hard to say why but this album just does not feel like a classic. That with Gloria herself which is graceful and charming just as usual. She also is in good voice here. Another thing which makes the album not a classic is the fact that there are surprisingly few ballads. But just to make it clear most of the tracks just shine.

About the album name it just so happens that Cuba is 90 miles from Key West. It is a return to roots as in herself she probably did not leave Cuba. The final track, “Millas”, is somewhat sad and for the album it is a nice final track. This is a poetic and impassioned album and it is a rarity but it is about the mood you are in. When it is hot outside or you are by the beach it is priceless. Listening to it makes you touch the sky. But when it is cold outside or you are not in that mood it just does not feel the same. It has somewhat limited range. Every bit of respect in the world for Gloria Estefan and everybody she has worked with for the album which is a rarity in 2007, a year in which traditional Cuban music like this couldn’t have been further away from the mainstream in America but this 14 track affair just seems like there is something missing.