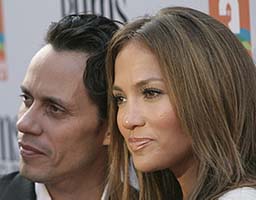 Jennifer Lopez and husband Marc Anthony, who co-star in the new movie “El Cantante,” will go on a concert tour together starting next month. They have time to spend together and that is nice to notice.

The 14-date tour will open Sept. 29 in Atlantic City, N.J., and wrap up Nov. 2 in Miami. She will perform songs from her Spanish-language album, “Como Ama una Mujer (How a Woman Loves),” which was mainly produced by Anthony. They are involved in several latino promoting activities and were very active with mtv tres. Hope that is how you type it not sure.

Anthony just released the soundtrack to “El Cantante,” a biopic of salsa legend Hector Lavoe, which opened in theatres last Friday. Anthony, 37, plays Lavoe, a talented but troubled Puerto Rican singer, and Lopez portrays Lavoe’s long-suffering wife, Puchi. Lopez produced the movie. Since they got married in 2004 she managed to find the productivity and latino authenticity she had lacked for some time.