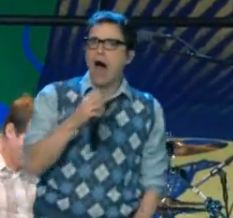 I can’t believe how self-degrading this band has become over the years. If I wasn’t completely convinced that Weezer is just surfing the huge geek trend and trying to cut some cash by releasing crap material year after year, last night shattered any doubt. It’s enough to see Rivers Cuomo dance around like a socially awkward middle aged man on Jay Leno’s Late Night stage to realize it’s ALL OVER. Some of you nostalgic, naive schmucks might still have hopes for a new Pinkerton or Blue Album, but when you consider Weezer’s music nowadays is limited to lolcats, TV show buffoons for cover art and facebook, it all becomes very clear and sound – Weezer is dead for me.