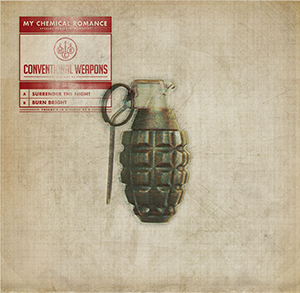 The songs were recorder in 2009, at that moment they abandoned the idea of releasing them, they even said in a statement that they moved the songs to trash.

Now I am glad that they’ve changed their mind and they started to release the songs one by one, under the name of Conventional Weapons.  The first song was released on 30th October 2012, and it was named Boy Division, and the single has also a B-side with the song Tomorrow’s Money. Conventional Weapons Number Five has 2 songs, on the A side is Surrender The Night, and on the B side, Burn Bright.

Tracklist for Conventional Weapons below:

Title: Number Three
A-side: ‘The World Is Ugly’
B-side: ‘The Light Behind Your Eyes’

The songs are actually kind of cute, and you can also purchase them from here, enjoy!