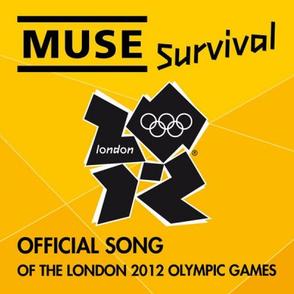 London 2012 has been anticipated by Olympic enthusiasts in Great Britain since its successful bid in 2005. Seven years of waiting and the time is finally upon us; two weeks and two days of life-changing triumphs, heart-wrenching defeats, shocks, surprises, smiles and tears. Countries across the world will be willing on the victories of home-grown talent and nations will stand united in the global togetherness of the Olympic spirit.

Now, how to write a song that encapsulates all the varying emotions of such a unique event? The expectations of such a song would be huge; impossible to meet some might say. Well, cue Muse’s ‘Survival’, the track which has been adopted as the official song of London 2012, and you will realise that the Olympic committee clearly knew what they were doing.

As a Muse fangirl who has loved them since Showbiz in 1999, you may think I would be bias towards anything they release. However, my liking for ‘Survival’ took a while to develop. When it first premiered on 27th June on Radio One I couldn’t help feeling a little disappointed. I thought that the amount of instruments used in unison created a sense of over-kill, that they were trying too hard, and that the song seemed disjointed.

But then the video was released a week later and my opinion completely changed. Played against a medley of Olympic moments throughout history, the song sends a shiver down your spine. I began to appreciate the subtle nuances and layers of the track; the male choir in the background mixed with Bellamy’s crooning polishing it off as an epic rock anthem worthy of the Olympics.

Forbes wrote an article on 28th June criticising the song for flying in the face of ‘the Olympic spirit’s endearing and enduring nature’, stating that ‘Bellamy appears to have a pretty shallow interpretation of the Olympics’, and that it is not the winning that matters; ‘when it comes to the Olympics winning tends to take, um, second place to the Olympic spirit’. I disagree with these statements entirely; the song mirrors the determination and conviction of every athlete preparing for the games. These people have given their life to their respective sports and Muse capture this in their lyrics; ‘Race, life’s a race/And I am gonna win/Yes, I am gonna win’.

Entering the stadium with ‘Survival’ playing will certainly motivate and inspire competitors to ‘keep up the pace’, ‘stay alive’ and ultimately ‘choose to survive’.