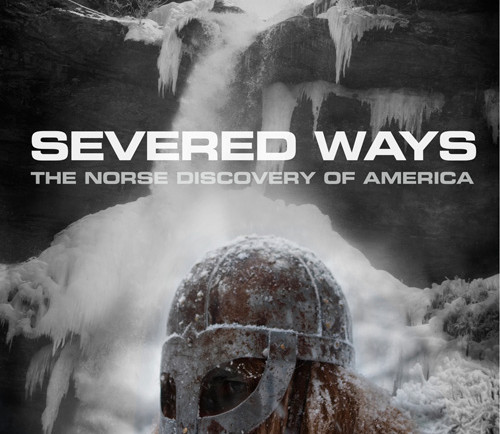 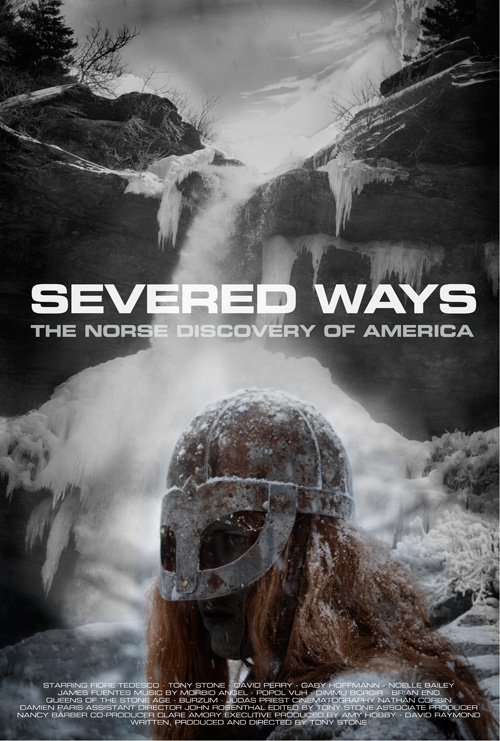 Today, I’ll be reviewing Severed Ways: The Norse Discovery of North America, a movie whose long and drawn-out title should say it all, but in case it doesn’t, I’ll explain a little: it is a movie that follows the struggle of two battle-weary Norse warriors to rejoin the rest of the exploring party following a massive battle against Native Americans.

My first impression after reading the back of the packaging was one of anticipation. After all, a movie about Viking warriors and their epic battles to a soundtrack consisting of songs by Burzum, Dimmu Borgir, and Judas Priest certainly couldn’t go wrong. The bottom line: I was expecting a good 109 minutes of brazen sword fights and axe throwing that would make Thor run away scared, leaving his hammer behind.

So with that in mind, I hit ‘Start’ on my DVD player. After a few minutes of prologue detailing how the conflict between the Norsemen and Native Americans (referred to as “Skraelings” in the film) began, the aftermath of said battle is shown. Dead warriors from both sides lay everywhere, some with three or more arrows jutting from their corpses. So far, I feel like my expectations are justified. 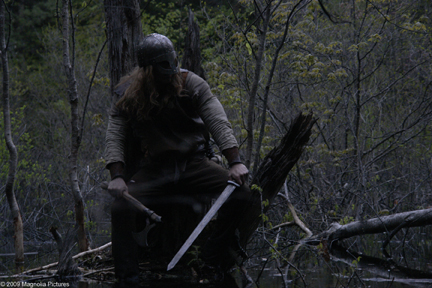 Finally, the two surviving Norsemen, the blond Orn and the dark-haired Volnard, awaken and dust themselves off. After a few minutes of subtitled Norse dialogue, the two warriors decide to begin on their quest to rejoin Leif Ericsson’s expedition up North. Right as they enter the woods, the movie immediately begins to go downhill.

From this point forward, the movie is as committed to realism as it can possibly be, without actually consisting of days and weeks of footage. And by this, I mean the remaining 99 minutes are nothing but montages of lean-to building and walking. There’s a scene where they attack two monks, killing one of them and burning down their cabin to the tune of a shrieking black metal song, but that’s about as exciting as it gets, and even that isn’t saying much, as the entire scenario lasts maybe one minute.

The monk that Volnard spared serves to attempt to give some depth to his character, as it fits with a flashback seen earlier in which Volnard kills a Christian priest that converted Volnard’s sister, who promptly committed suicide by cliff diving. Both of these events sets up a series of weak scenes in which Volnard tentatively befriends the monk, and apparently converts to Christianity. I’m guessing this is supposed to induce the audience into caring a little bit about the character, but I honestly couldn’t have cared less.

There’s also a bizarre scene in which Orn is lured, kidnapped, and raped by a Native American woman. He is then let go, while the male ‘Skraeling’ hunts after Volnard. After yet MORE montages of walking, Orn sees the monk that Volnard spared and kills him, provoking Volnard to attack Orn in vengeance. Immediately after, the Native American hunter hits Volnard with an arrow, killing him. Orn then sets up a funeral pyre for Volnard. The epilogue shows Orn dying of hypothermia in the snow.

Basically, this film was terrible. It had a lot of the same shaky hand-cam action that irritated us all in Blair Witch and Cloverfield, but with even grainier film quality. The scenery was beautiful, but that didn’t make up for the fact that barely anything ever happened within it. Like I said, the film was a total of 109 minutes of just walking. The Norse language sounded like it was done with a computer, and looked like it was haphazardly lip-synced by the actors. I understand the committal to realism here, but it really detracted from the already low quality of the film in this case. The subtitles were unimaginably cheesy, attempting to use somewhat modern slang like “This fish is killer.”

The action scenes were boring and short-lived, and over before maybe two slashes of the warrior’s sword. They seemed just thrown in at intervals, almost coming across as an attempt to keep the audience from falling asleep due to the many montages of walking.

The film itself was split into various chapters using large, cheaply-made red lettering that attempted to give some sense of plot beyond what was obvious. Whoever was in charge of that could have saved considerable time, effort, and resources just by changing the movie’s title to Severed Ways: A Film About Walking in the Woods. Severed Ways is boring, dull, and truly shows why more of a good thing, realism in this case, does not necessarily make the whole product better.

After actually watching this incredibly dull excuse for a Viking film, here’s the real bottom line: This is a movie that would make Thor ashamed to be one of the Norse Gods.

Hey, I'm Taylor. I'm a 19 year old sophomore computer engineering major at Georgia Southern University/Georgia Tech. I also write for the GSU Honors Program Mosaic newsletter, and I'm currently attempting to form my own band, inspired by groups like Carcass, In Flames, Arch Enemy, At The Gates, Children of Bodom, and Scar Symmetry.

View all articles by Taylor Walsh