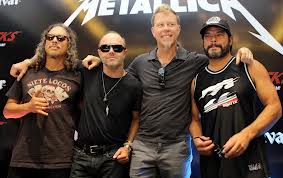 In case you weren’t aware, Metallica are preparing a 3D movie called “Metallica Through The Never”; the film has been described by one of the actors as “a concert movie meets ‘The Wall’ meets Metallica.”

“It’s in a way like a 3D concert movie but there’s also this narrative that ties together all the footage,” actor Dane DeHaan (“Chronicle”, “The Amazing Spider-Man 2”) explains.

There’s not much we really know about the plot, but Lars Ulrich describes it as “two separate worlds — a Metallica show and a story that unfolds in a parallel universe — and at some point they intertwine“.

I… don’t really know what to say. I’ve been a Metallica fan since for ever, and I’ve been with them for a long time, but their recent work (and by recent, I mean more than 10 years) is, for the lack of a better word, shabby. It’s so much less than what we were used to during the good old days, so I’m not really sure what to expect from the movie; but the actors seem thrilled, and Metallica seems really thrilled, so I still have my hopes up.

“It’s gonna be, first of all, really rock and roll and really ‘Metallica’ for lack of a better word; they don’t hold back at all. But during the concert, I basically go on this trip as a roadie for the band and I pretty much literally have to go through hell and back to take it back to them, and all of this is going on during the concert so it all ties together really kind of beautifully and uniquely. It’s unlike anything that I’ve ever seen before; it’s almost like a concert movie meets [Pink Floyd’s] ‘The Wall’ meets Metallica… We filmed it last August.”

Written and directed by Nimród Antal (“Kontroll”, “Predators”), the movie is scheduled to make its theatrical debut on August 9.