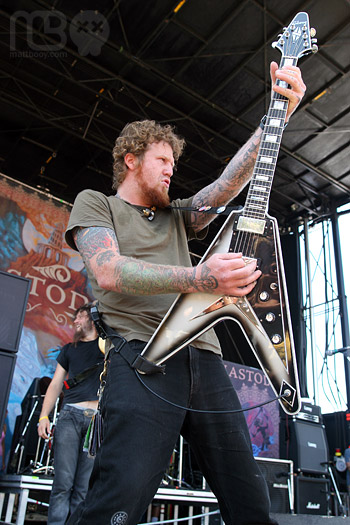 He's not suffering from any head injury in this particular pic. He's just wasted.

He's not suffering from any head injury in this particular pic. He's just wasted.

Last year’s VMA’s left Mastodon guitarist, Brent Hinds, with some severe head trauma, that lasted for up to eight months, after he got in a drunken haze fight and got his head cracked wide open.

Some of us might think, there’s nothing good that could come from some permanent head trauma, but apparently Brent’s new found state of mind (“I was dizzy for eight months,” he says) helped him elaborate some of Mastodon’s best work, at least according to the band.

“During those months, I just sat with my acoustic and a little marijuana, and wrote all the music. I wanted a more melodic, easy-listening situation, and that definitely came from having head trauma.” says Brent, about the period in which he, with fellow band members, guitarist Bill Kelliher, bassist-vocalist Troy Sanders and drummer Brann Dailor recorded the new album at their Atlantian studio.

The band’s breakthrough release into the metal mainstream was 2006’s “Blood Mountain,” bringing the prog metalists into the well deserved spot light. Mastodon plans to follow the same approach by making more broader music, to appeal to a larger audience. This is probably the main reason why they decided to get Brendan O’Brien (Bruce Springsteen, Pearl Jam) on board to produce their album.

The finished album will contain only seven songs, and, like previous Mastodon outings, will be a concept record. After past efforts focused on fire, water and earth, the new disc will explore air, ghosts and the ethereal world. The group has talked about eventually combining the releases into a box set called The Elements.

“Musically and lyrically, this is the record we’d be writing if we weren’t going to exist tomorrow,” says Sanders. “We don’t feel like we have to do a certain type of record to please a certain group. We’re free to change.”