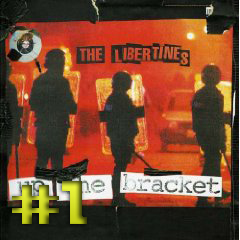 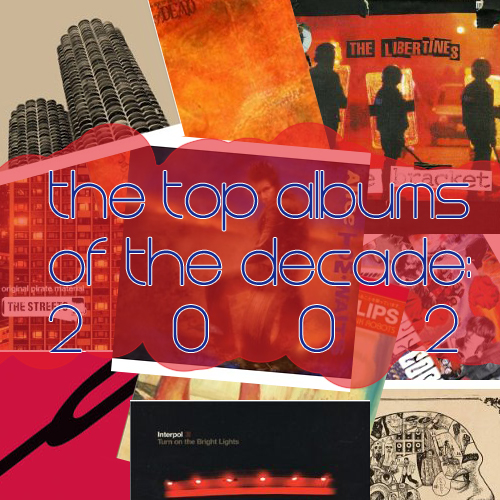 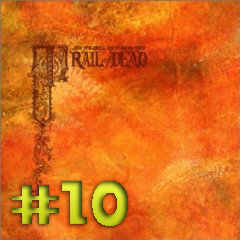 Remember when rock bands made albums and not just a collection of songs? Yeah, I don’t either. Except for Trail of Dead’s third outing, Source Tags & Codes. Not only is it one of the few examples from the Aughts of the album qua album, but it’s an aggressive statement to boot. From the grungy prog tidal wave of opener “It Was There That I Saw You” to the hardcore punk of “Homage” the whole album is one massive ‘life is fucked up,’ both musically and lyrically: Jason Reece muses in “Heart Is In The Heart Of The Matter,” “I’m so damned, I can’t win/ With my heart in my hands again.” Better yet, when Conrad Keely bluntly states, “It’s hard to imagine, it’s so hard to perceive/ To find an expression for what it all means,” he’s singing about the mental process (or a lack thereof) of performing. But he may well be singing about humanity, too. And that’s the point. (Steve Lampiris) 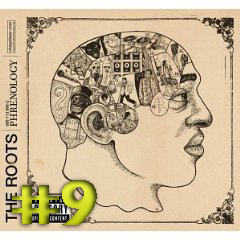 Just how does a group go about following up Things Fall Apart? Oh, right. They record the hip-hop Dark Side of the Moon. The perfect coherence of Things is swapped for a schizophrenic sampling of, well, everything: there’s rap, funk, soul, jam, trip-hop and even punk. And somehow they make it work. Along with all that, Black Thought is in top form – his lyrics are intelligent and his flow is determined. “Water,” for example, finds Thought bitterly chronicling the way people use drugs to give up on life instead of, say, using music to escape. He also takes on America’s obsession with sex on “Pussy Galore”: “But what for, ‘cause sex is the law/ And there been many an empire rise and fall.” The stand-out track, though, is the incredibly funky “The Seed (2.0),” featuring Cody Chesnutt (who wrote the original). It’s the closest thing the Roots have ever come to recording candy. But it’s also a poignant take on wanting to be remembered and leaving your mark on history. As Black Thought succinctly puts in “Water,” “They say a record ain’t nothing if it’s not touching.” Indeed. (Steve Lampiris) 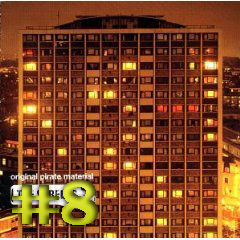 Mike Skinner’s breakthrough was a true triumph for bedroom producers around the globe. Out of the banality of Birmingham suburbia came one of the most arresting and socially-conscious records of the decade, with Skinner’s biting observational lyrics striking a chord with the bored generations across the UK. “Has It Come to This?” was the first hit single, which was then followed by “Let’s Push Things Forward” and “Don’t Mug Yourself” – all of which were taking UK garage in a new and yet more commercially-appealing direction. Naturally, the album sank quickly in the sea of gangster rap in the US, but critics both side of the pond were singing their praises for this beat-twisting and thought-provoking debut. (Conor O’Brien) 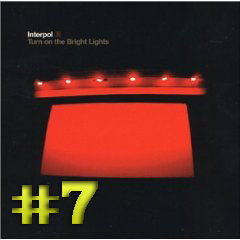 One of the best of the decade, “Turn on the Bright Lights” officially enforced Interpol as the most hyped band of the year, turning them almost over night from some obscure NYC post-punk revivalist act into the indie band of the moment. A fact very curious, without a doubt, considering the record is an entire intensely dark and moody ride – perhaps because of the band’s uncanny resemblance to Joy Division. Everything fits: Paul Bank’s elegiac vocals so reminiscent of Ian Curtis, the contemplating lyrics, the haunting rhythm, but this wasn’t another tribute band, mind you. Turn on the Bright Lights was the pinnacle of the then booming NYC scene, on the crossroad between past glorious influences and modern innovations, catching absolutely everybody by surprise with its fresh sound. It’s an album that grabs you from the very start – “Untitled” and “Obstecle 1” immediately do well in transporting you to a foggy and confusing world,  yet incredibly thrilling. “PDA” and “The New” are probably the most uplifting tracks off the album, fully packed with echoing guitar lines and buzzing riffs. It’s an over-hyped album, I know, but chances have it that it will still remain one of the best albums you’ve ever spun. (Tibi Puiu)

The Coral – The Coral (Deltasonic) 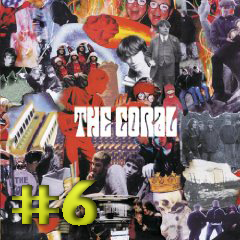 It was albums like the Coral’s self-titled debut that reminded us there was still some creativity left in modern music. True, the Merseyside six-piece (now five) weren’t afraid to show their influences, but when a band can draw from a vast psychedelic well of sea-shanties, rockabilly, jazz, dub and 60’s rock it shows a real authentic ingenuity. Not only was “The Coral” nominated for the Mercury Prize just a day after it was released, but what made this album all the more special was that, at the time of recording, the average age of the band was only 19. Sadly, they have somewhat lost the blistering energy of this record over the years, but they still continue to test boundaries and draw on new inspirations. There must something in the Mersey water. (Conor O’Brien) 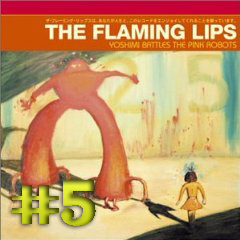 Gov. Brad Henry (D-OK) is the man. Given the usual democratic-system roadblocks that presented themselves when the Flaming Lips’ near-trademark “Do You Realize??” came within three stodgy, tight-assed votes of becoming Oklahoma’s State Rock Song, he issued an executive order that burned Wayne Coyne & Company into the state’s official history. By the time that “Do You Realize??” and the accompanying tome “Yoshimi Battles the Pink Robots” came out in 2002, the Lips didn’t really need that top-down recognition anymore. They were becoming one of the biggest bands in the world that still made major blips on the indie radar. Given how truly grandiose “Yoshimi” is, it feels like a big step further into the realm of arena rock after the band’s 1999 cornerstone “The Soft Bulletin.” In retrospect, it’s inconceivable that the Flaming Lips ever performed for crowds that didn’t pour into the thousands nor border on the insane. How fittingly times have changed, thanks to one Japanese girl with a black belt in karate. (Ty Williamson) 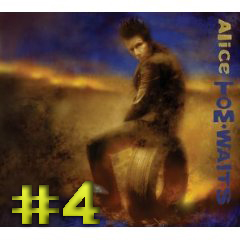 It should really be more surprising that an album based on a musical based on Lewis Carroll’s perhaps-seedy inspiration for Alice In Wonderland, as narrated by the devil on cough medicine, turned out to be Tom Waits’ prettiest, most tender album in years. But Waits has never been one to play an expected hand, and so here it was: Alice, an album of beauty, regret and lost innocence, wrapped up in victrola jazz and backwoods blues. None of the dark, twisted sensibilities that Waits had perfected over the years was forgotten – even the gorgeous title track delved into the shadows: “How does the ocean rock the boat? How did the razor find my throat?” That it’s followed up by songs as divergent as “Fish & Bird” and the demented “Kommienezuspadt” just reminds you how gloriously, splendidly broken Waits’ internal jukebox really is. (Al Byrne) 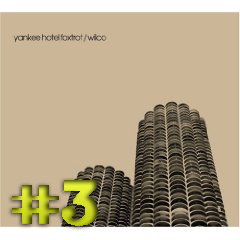 We’ve seen a lot of failed attempts to mix in alternative/folk with experimental/psychedelia in the past, but where others epically failed, Wilco simply rose up and managed to deliver nothing short of a masterpiece – Yankee Hotel Foxtrot. A bit of shame it was caught up in a whirpool of vicissitude, spinning it around money, labels, a commercial subdue refusals. Luckily, Wilco changed labels and managed to release the album untouched, uninfluenced and to great critical acclaim. What you’ll notice from the very start on YHF is how much the band has dwelled into experimentation as opposed to the previous more intimate records. The somewhat non sensical, yet joyful opener “I Am Trying to Break Your Heart” touches first base on Wilco’s progressive side, before giving way to other eerie gems, like the acoustic “Kamara”, the country-folk “I’m the Man Who Loves You” or the loud “Heavy Metal Drummer.” Subtle yet elevating experimentation, sweet music and a Jeff Tweedy at his lyrical and creative best. Who could ask for more? (Tibi Puiu)

Queens of the Stone Age – Songs for the Deaf (Interscope Records) 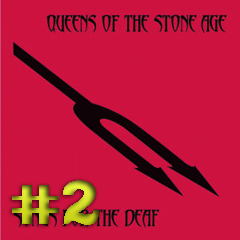 Upon Rated R’s release, QotSA were immediately elevated to rock saviors status. For the non-connoisseurs, one would expect this kind of pressure to put some extra weight on Josh Homme’s huge shoulders, but this won’t ever happen to a group of people selfishly in love with their own music; people who don’t care about charts, sales and most of all music critics *cough *cough. It’s no surprise people like Dave Grohl (Nirvana, Foo Fighters), Mark Lanegan (Screaming Trees/Soulsavers) or Dean Ween (Ween) joined in on the fun. Not only did Songs for the Deaf fill the huge shoes left by the drug fest that was Rated R, it went even farther. Progressively dark, banging drums, experimental percussion, intricate instrumentals and some of the hardest riffs you’ll ever hear. “No One Knows” comes to mind whenever the words killer and riffage come together in a sentence; “Hangin’ Tree” is hard and powerful, yet mellow and intimate; literally, “Millionaire” will simply blow your mind and who on Earth could forget the prog/Sabbath lovin’/bigger than life sound of “A Song for the Dead”? A true classic. (Tibi Puiu)

The Libertines – Up the Bracket (Rough Trade)

The Libertines, created by the love between friends Peter Dohery and Carl Barat, offered up something new to the legions of garage rock fans created thanks primarily to The Strokes. This band offered something more to fans, they were much more accessible. Whether it be their Albion Room gigs in their flat or their raucous gigs where the crowd were just as much part of the band as each member The Libertines created a sense of romance and camaraderie rarely at a level very rarely seen.

‘Up The Bracket’, which was produced by The Clash’s Mick Jones, isn’t polished, the singing isn’t always in key and the timing don’t always match up but that’s not what The Libertines are about.

Brilliant tracks such as ‘Time For Heroes’, ‘Horror Show’ and ‘I Get Along’ provide the soundtrack to a generation of misunderstood youth. (Chris Wheatley)