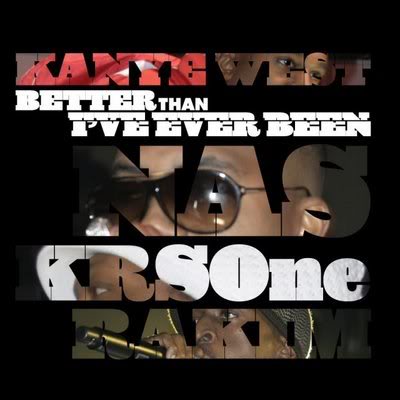 The Aughts have been rather stingy with its worthwhile posse cut output. In fact, besides “Better Than I’ve Ever Been”* I can’t recall a notable example. It’s a shame, really. Posse cuts used to be a place where a half-dozen or more emcees could all rock the mic together – even while rapping about unrelated subject matter – and it would work because of the group dynamic and its collective energy. But at least we have “Better,” and its superior remix “Classic (Better Than I’ve Ever Been).”

While the Rick Rubin-produced original samples “Give Me the Night,” the DJ Premier remix surpasses it by sampling “Dance the Kung Fu.” The latter’s opening riff is funkier by an order of magnitude. Compared to the smoothness of “Night,” “Kung Fu” is rough and dirty which fits the old school nature of the track. Also, the remix features Rakim, making the track important all by himself.

Much like it should be, the bookend verses are done by the elder statesmen, Rakim and KRS-One. They show the young’uns how to truly dominate the mic. During Rakim’s opening salvo he posits, “Asking teenagers, OG’s and nasty kids/ What their definition of classic is/ Timeless, so age don’t count in the booth/ When your flow stays submerged in the fountain of youth.”

Next comes Kayne’s turn wherein he argues that while nothing he’s done can be considered classic yet, he’s still royalty within the modern rap world: “Can’t buy this, superflying this/ Like shininess, you’re highness/ It’s performing, look how long the line is/ It’s what happens when you make shit that’s timeless.”

Third in line is Nas. During his time, Nas contends that being classic isn’t just about making great songs that are everlasting. Here, he asserts that he’s classic because he’s done everything before you did it – and before it was cool. He addresses the “fake hustler rapper” when he brags, “Oh you went platinum? Yeah, that’s nice/ Now let me see you do the same thing twice/ Three times, four times, then a couple of more times/ Please, you’re amateur night, it’s Showtime.” That diss goes well with the verse’s overall theme of ‘don’t copy Nas’ when he later says, “When they do make the whip you like/ Your chips ain’t right/ By the time you could afford it/ The car ain’t imported.” Ouch.

Not to be outdone by anyone, KRS kills the track. In fact, he’s so damn great here that I’m gonna include his entire verse:

How many of y’all got ‘Criminal Minded’?
You, you, you, y’all don’t be blinded
Me, I got no jewels on my neck
Why?  I don’t need ’em, I got your respect
KRS-One, 20 years I rock
I do it for JMJ and Scott La Rock
This hip-hop and we is a nation
Don’t you wanna hear more KRS on your radio station?
Instead of broadcasting how we smoke them trees
On the radio we need to hear more local emcees
Where you at? C’mon where you at?
This is the difference between emceeing and rap
Rappers spit rhymes that are mostly illegal
Emcees spit rhymes to uplift their people
Peace, love, unity, having fun
These are the lyrics of KRS-One

It’s an uplifting 16 bars for sure, and demonstrates that it doesn’t matter how much of a prodigy you are as either a rapper or producer (or both) if you don’t have anything to say.

Perhaps its for the best that this decade hasn’t produced that many (read: more or less any at all) notable posse cuts. This fact simply makes “Classic” all that much more important within its own time – to say nothing of the great rappers involved. The song is also an important return for DJ Premier, who for the last few years has been toiling in the underground world for whatever reason. It’s great to see him mix it up with the best of of the best. Hopefully, the song’s title will one day be recognized as the prophetic declaration it is.

*I am aware that, technically speaking, a posse cut requires six or more rappers. I’m willing to make an exception here because of the nature and quality of the song.