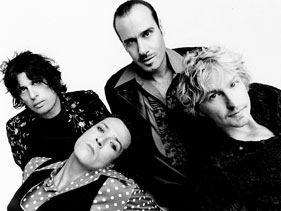 One month ago, the former [tag]Stone Temple Pilots[/tag] frontman, Scott Weiland broke news of a posible reforming, last month at a benefit in Florida, telling the Miami Herald to watch out for an STP reunion in the months ahead.

Recently [tag]Velvet Revolver[/tag] guitarist Slash recently confirmed to Billboard.com, that Velvet singer Scott Weiland, will reunite with his previous band for a short series of shows this summer.  According to HardDrive Radio, the reunited Stone Temple Pilots will perform their first show at the Rock on the Range on May 17 in Columbus, Ohio.

The band broke up in 2002, after Weiland ran into some divergences with guitarist Dean DeLeo, but apparently the two are friends once again. Scott even hinted some possible new material as well:

“We were never a band that felt like we needed to lean too hard onto our muscle,” he said. “We always felt like we had enough beauty and enough finesse in our music, you know, while we were together, that could carry us into a long career. So for us to make a record at an older age doesn’t seem like a stretch, you know, ’cause we were never all about brawn.”