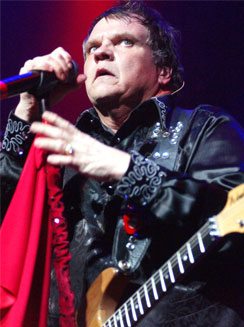 Bad things for Meat Loaf fans and artist alike have recently happened. He has cancelled a European tour after developing a cyst on his vocal cords, the singer’s website said on Tuesday.

He is 60 and probably his age is an important factor in that. He is going to undergo four to six weeks of vocal therapy before doctors decided whether he needs surgery.

The rocker had already scrapped several British dates when he got down from the stage. Voices began to say that it would be his last performance. But Meat Loaf insisted he was not retiring for good. “It really breaks my heart not to be able to perform these shows,” the singer said in the statement.

“I was really looking forward to capping off a great year and celebrating the start of the holidays with the fans. But I have to do what the doctors tell me so I can look forward to healing and coming back strong in 2008. Let me dispel any rumors before they start – I will be back.”

The artist had heart surgery in 2003 after collapsing onstage in London. But we keep our fingers crossed and we believe in his capacity to claw his way back singing at concerts. The following dates have been canceled: