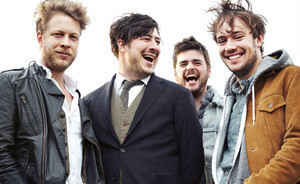 Mumford and Sons have released the best selling album in 2012, but they’re already working on some new material.

The band released ‘Babel’ in September – the album went straight to number one, receiving acclaim both from fans and critics; but the band isn’t resting on their laurels, and instead, they’re working even harder. Banjo player Winston Marshall told NME:

“Will we wait years for the next album? F*ck, no. You heard it here first. We’ve just started working on new songs, got a rehearsal studio. They’re bones of songs, but really exciting bones. Sturdy bones.”

Currently, Mumford and Sons are on the second leg of their ‘Tour Of Two Halves’ across the UK and Ireland. The tour started with them playing some intimate theater gigs and clubs in London and moved onto bigger shows, culminating with the sold-out date at London’s O2 Arena on December 18, less than two weeks from now. If you’re among the lucky people who have a ticket, well then… congrats!