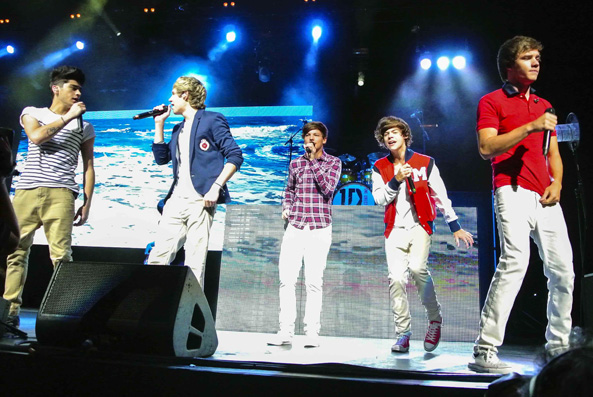 Taking Over The World 1D

Taking Over The World 1D

If there was an Olympics of boy bands then One Direction would be breaking world records all over the place.

We’d put Liam Payne in for the boxing, Niall Horan for gymnastics, and Harry Styles, well it can only be the 100 metres, being the Casanova superstar that he is.

Two years ago they were unknown, but after storming to the UK X Factor final in 2010, they’ve been an unstoppable force and now assume the mantle of biggest boy band on the planet – with no signs of slowing down.

After a record-breaking debut single and album, we fast-forward to yesterday, where they performed to a global audience of over one billion at the closing ceremony of the London 2012 Olympics.

Waltzing around the stadium like they owned it, they showed a sense of swagger that only seasoned bands normally show, and if there were any teenagers still left in the world who didn’t know about them, there probably won’t be many left now.

If X Factor created One Direction, then the internet – and more importantly social media – made them.

OneDirection.net pitches itself as “The World’s Best 1D Fan Site”, and at any one time there are literally hundreds of fans chatting away to each other on the site.

If you’re a fan of celebrity gossip sites like Celebuzz, Perez Hilton and OnePopz, you’ll no doubt see daily articles on them, whether it’s Harry Styles latest fling or a new VEVO video release. There’s literally no escaping this group of boys.

Even the bigger, more serious internet news outlets such as the BBC, Daily Telegraph, ABC News and CNN run stories on them more frequently than what would be expected of a pure pop music group.

Parents, if you’ve got young children, stock up on some One Direction merchandise now to avoid any Christmas stock shortages. We don’t think your kids would be too happy!