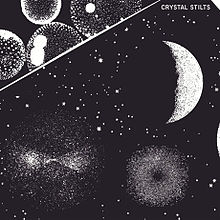 You remember the 2003 film Lost In Translation don’t you? Yeah. Fantastic wasn’t it? Too flippin? right it was! The film was directed by Sofia Coppola and starred the greatest actor (although perhaps not technically) in the history of American cinema: Bill Murray. Fact. If you can also remember the soundtrack, you’ll remember that it was also ace! It was all fuzzy and feedback-drenched indie brilliance.

No. The Lost In Translation soundtrack wasn’t by Crystal Stilts here – but it did feature original fuzzy-sounding bands like the Jesus & Mary Chain and the work of Kevin Shields’ and other bands to surely have influenced the Crystal Stilts. It basically does sound a lot like our New Yorker friends here and I guarantee that the band’s main duo (vocalist Brad Hargett and guitarist JB Townsend) own a much-worn copy of Pyschocandy somewhere. I would also bet a bowler hat and a crumpet that they own one or two copies of albums by a wide range of great Great British bands have been played to death as well.

For example, close your eyes and imagine Joy Division, The Smiths, The Cure, Orange Juice, Ride – and none Brits My Bloody Valentine and Velvet Underground – being covered by the aforementioned Jesus & Mary Chain (with an effects pedal) and you’ll pretty much have it nailed. Thankfully, it sounds like the band have been experimenting slightly with smiling, as this chirpier follow-up to Alright of Night has a bigger influence of pop melody. Hurrah! This is best demonstrated by the album highlights Shake The Shackles, which is a psych-rock corker that improves with every listen. While Precarious Stair has a great Love and The Byrds (with feedback) melody.

However, the constant feedback and (slightly depressing) drone is still very much evident and perhaps too much for me to regard this work as a complete triumph. It’s good solid album and much of their recent plaudits have been very well deserved. But I’m fairly sure that the album was half-responsible for a colossal migraine suffered by the poor reviewer here after great dedication and ‘over-listening’! Thank Christ for Nurofen.

Overall, yeah – it’s pretty good spooky 60s psych and 80s dream pop, but The Stilts (despite their towering name) are still not quite head and shoulders above the rest yet. Maybe third time lucky?