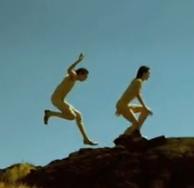 At the beginning of the month, I was simply psyched by Yeasayer‘s new song “Ambling Alp“, off the band’s upcoming 2010 new album “Odd Blood.” Back then I said “The song, as a whole, makes for an incredible uplifting experience, packed with memerising electro beats and a bright pulsating rhythm. So far, it seems a lot more sharper, defined and focused than anything on their debut, which can only make me wonder what gems I might get to find on the new Yeasayer.” The video just premiered on Pitchfork a few hours ago and, let me tell you, it’s not quite what one would expect. It’s bizarre on so many different levels, and the NSFW nudists towards the end only amply the effect. Considering nudes and tits have been a common motif found in indie videos lately, I can’t help wondering if this is the new hipster trend or everybody’s been using the same director. The song is win, all things aside, so I don’t really care. Odd Blood  will officially land on February 9, 2010 via Secretly Canadian.