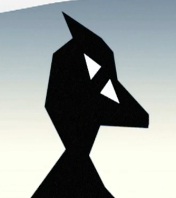 A world of polygons, gradients and other pointy stuff is all that is present in White Hinterland‘s latest video for her latest single “Amsterdam” – that doesn’t mean that all is as it seems, though.

I’ve really just recently come across Casey Dienel’s (aka White Hinterland) work, but I can say I’m well already within her tight musical grasp. Who couldn’t love a voice like that?