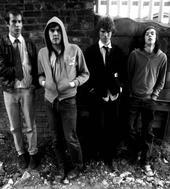 After touring the whole of October alongside [tag]Maximo Park[/tag] the indie quartet [tag]Good Shoes[/tag] is now ready for their biggest headline tour to date, that will feature a string of dates all across the UK in November. The gig trek will start on November 11 in Birmingham‘s Academy 2, after which the band will do cross country shows all around England, Wales and Scotland, before finally calling it over on November 21, in London‘s Astoria. Our mail received from Good Shoes also included a last date of November 30, in Liverpool but apparently it doesn’t show up on the band’s MySpace, so it’s probably been canceled. Tourdates after the jump.

You can buy tickets from See Tickets, Ticketmaster or Ticket web.