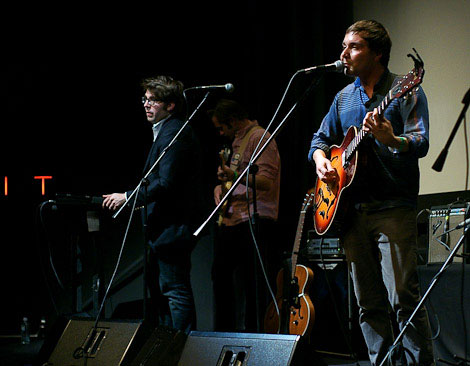 I simply loved the 2008 “In Ear Park” by the smashing indie duo Department of Eagles, individually formed by Grizzly Bear’s Daniel Rossen and Fred Nicolaus. At times the album feels likes a religious experience, one where the surreal meets life and blends into one unique crossroad. The whole thing was extremely polished, from composition, to arrangements, to production – a perfectionist’s soundtrack, if you will. As such, a lot of tracks have been scrapped.

Today, it has come to my attention that American Dust will be releasing a new Department of Eagles record, comprised of tracks recorded on various sessions between 2003-2006, as well as a few other songs that didn’t make the cut for Ear Park. Like the press release very well puts it “this waggish and at times breathtakingly intimate collection will delight fans of Department of Eagles and Grizzly Bear, and anyone else with ears.”

[MP3] Department of Eagles – No One Does It Like You