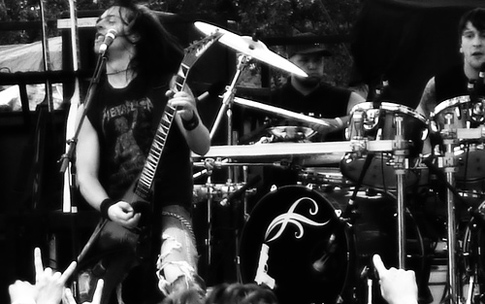 I was simply blown away by, metal core quartet, [tag]Bullet for My Valentine[/tag]’s  debut album Poison. It was energetic, punk and had some extremely catchy metal hooks; they were great. Now their second release, “Scream, Aim, Fire,” is getting closer by the day and from the two new songs off of it, that have been posted around the internet lately, it sadly seems the band haven’t been spared by the oh so dreaded sophomore slumps. The news songs are called “Eye of The Storm” and the title track “Screm, Aim, Fire.” Both are very terrible, mostly due to them changing their style, that I totally appreciate it, it’s really a brave thing to shift styles after experiencing such massive success, probably in their desire to evolve as a band. The problem is they’ve gone totally in the wrong directions, the previous metal riffs are still here, but they’re now more trash and power metal like and the most terrible thing are the vocals, that have morphed from a decent melodic scream to a all growl. “Scream, Aim, Fire” lands on January 28.