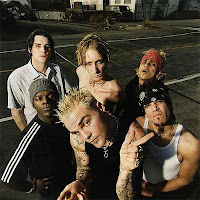 Yes, Crazy Town – the rap-rockers from the Clinton Administration – are releasing a new studio album later this year.

Apparently entitled The Brimstone Sluggers (I don’t know what that means, either), will be “dropping soon” as per a YouTube announcement. The background music to the thirty-second spot suggests that the last decade of music (and, therefore, the subsequent destruction of rap-metal) hasn’t occurred in the world of CxT. This probably explains why they last put a record out in 2002.

Whatever, man. You can watch the announcement below.