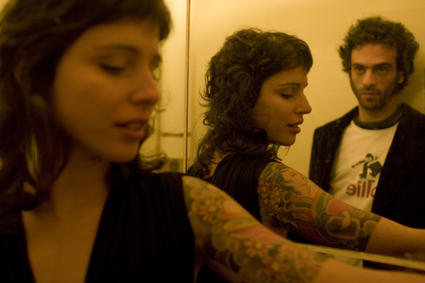 I’ve always had a thing for the Brazilian feel good vibe and culture. Music and dancing there is viewed as a celebration of life, which can be best seen during Carnivals. While over the years the Brazilian musical scene has delighted us with beautiful arrays of diverse genres and influences like the samba, bossa nova, funk carioca or one of my personal favorites, capoeira music, it’s now time for electronic music to make its presence felt in the tropical landscape. Actually, since the beginning 21st century it seems that electronic music has rapidly begun to gain more and more ground, becoming a global phenomenon.

Télépathique is an emerging electro-rock band from São Paulo, made up of a singer (Mylene) and DJ/producer/drummer (DJ Periferico), who has remixed songs featured on the “City Of God” remix soundtrack album, and has produced such Brazilian acts as Otto, Trio Mocoto, BiD, and Sidney Magal. The two form a extremely powerful electro groove duo, with Mylene often taking MC duties, mixing in their sound the flavour of jungle music as well as house music.

After “Eu Gusto” (“I Like It”) is a stunning Portuguese sung electro anthem, packed with robo synths, a haunting background and a distorted chorus. Eu Gusto is off Télépathique’s from their latest EP “Love & Lust,” out March 18 via The Control Group.