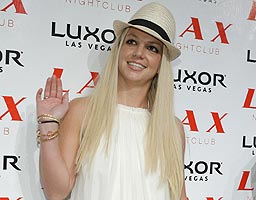 Britney Spears spent the night partying in Los Angeles. That is after she heard the court order to undergo random drug and alcohol tests as part of her custody battle.

She was having fun with friends, including Canadian singer Avril Lavigne, People.com reports. Before that she went to the Beverly Hills Police Department because a group of photographers were following her; or so she says. There was no action taken.

A clubgoer told People that “She was dancing on the tables trying to be really sexy, even putting a black sock over her head as a hat, and putting on a show for everyone,” so it is hard to say that she is taking the court order very seriously.

Los Angeles Superior Court Commissioner Scott Gordon yesterday ordered both Spears and Federline to complete a “parenting without conflict” programme and to stop making derogatory comments about each other. The children have no fault in this and it is sad for them. Growing up and receiving a good education is probably less important for the singer than going out and partying.