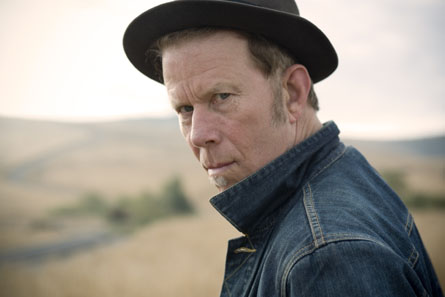 There’s no doubt about it, Tom Waits is a very cool cat. Few people are as slick and sharp as Mr. Waits, a man who’s virtually portraits the perfect entertainer role, but when you can successfully entertain yourself you reach a whole other level, and seeing how Tom Waits is the depiction of coolness there’s no doubt about we’ll be in for some fun. What I’m talking about is the latest interview that had Tom at its center, conducted by none other then … Tom. That’s right, the man posted earlier today, on the Anti- website, an interview in which he’s both putting and answering the questions, in a very intriguing, interesting and above all fun, manner.

The interview itself is a real gem, that gives a lot of awesome insight around Tom Waits life, mind and heart. In the interview you can read, among other interesting stuff, what’s Tom’s most curious record in his personal collection (The best of Marcel Marceau), what are the artists and songs that have shaped him into the man he is today, what’s scary for Tom Waits (i.e. Jail door closing) and loads of other fun questions about his artistic life. Also he didn’t pass the chance to talk a bit about his part in his latest, upcoming movie Dr. Parnassus, a movie by the great Terry Gilliam, in which Tom’s set to play THE devil (not just a devil, he’s too badass to play that). Here he’ll play next to a stellar cast including Johnny Depp, Jude Law, Christopher Plummer, Colin Farrell, and the late Heath Ledger. Bellow you can read an excerpt form the Waits-Waits interview, in which he talks about the movie, working with Terry Gilliam and Christopher Plummer.

Q: Tell me about working with Terry Gilliam.
A: I am the Devil in the Imaginarium of Dr. Parnassus–not a devil…The Devil. I don’t know why he thought of me. I was raised in the church. Gilliam and I met on Fisher King. He is a giant among men and I am in awe of his films. Munchausen I’ve seen a hundred times. Brazil is a crowning achievement. Brothers Grimm was my favorite film last year. I had most of my scenes with Christopher Plummer (He’s Dr. Parnassus). Plummer is one of the greatest actors on earth! Mostly I watch and learn. He’s a real movie star and a gentleman. Gilliam is an impresario, captain, magician, a dictator (a nice one), a genius, and a man you’d want in the boat with you at the end of the world.

Check out the rest of the interview at Anti-. The movie, Dr. Parnassus, is set to hit the big screens sometime in 2009. The wait may be long and arduous, but seeing Tom Waits playing the devil is well worth it. Actually when I first heard this, the first thing that popped in mind was his video for “I Don’t Wanna Grow Up“. For those of you unfamiliarized with it, urgently check this out!

Tom Waits’ summer tour is still on schedule, so grab the phone or keyboard and order a ticket to a show next to you asap. Dates bellow.