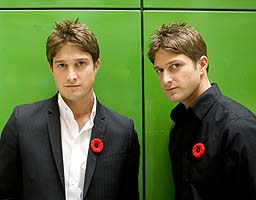 The boy band saga is repeating itself for years. Just the names are different.

Ryan and Dan Kowarsky were recognized earlier this decade for their polished, glossy pop sounds in B4-4. However, unlike groups such as the Backstreet Boys who still continue to milk that sound dry, the identical twins’ new outfit RyanDan and album of the same name is musically the polar opposite of prior efforts.

“I think it’s different from what we did, which was more pop sound, more ‘boy band-y’ kind of sound,” Dan Kowarsky says with brother Ryan next to him. “At the time, as good as it was, it was frustrating to us because we were playing for a much younger audience and their focus would be on our hair or our clothes. There was nothing about the music, nothing about songwriting.” “We found out that our mom had Parkinson’s disease,” Ryan says. “We didn’t know anything about Parkinson’s disease at the time and started looking into it. And it scared us to be honest because we didn’t know what was going to happen and how fast it was going to progress. We flew back to our mom and stopped doing music for about two months.”. “She felt very guilty that we stopped doing everything for her,” Dan continues. “So she really pushed us to get back into the studio. She has an all-time favourite song, which is The Prayer, so we wanted to surprise her. We recorded it for her, woke her up about two in the morning and played it for her. She was just bawling her eyes out.”

What should be admired about these boys is that they have made it big but they have not forgot where they came from and they say that their biggest fans and critics are their parents. “They want to see every single interview and read everything,” Ryan says. “My mom is collecting articles, while my dad, with his music and singing, critiques everything. He makes sure we’re doing things the right way and properly.”.