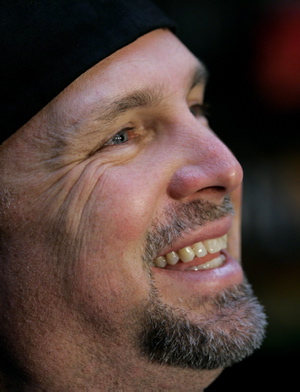 Garth Brooks is a living legend. But above being a musician he is a family man and so he is hard to see because he does not play numerous gigs.

He imposed himself a retirement but he is returning to play just nine back-to-back concerts in Kansas City to promote his three-disc greatest hits collection, “The Ultimate Hits.”. The 45-year-old Brooks says he has no regrets about bowing out of recording and touring in 2000 to raise his three girls, now aged 11, 13 and 15, with his ex-wife, Sandy, in a small community just outside Tulsa, Okla.

Just think that he is flying back and forth between Tulsa and Kansas City every day in order to accompany the girls to school every morning. “We take them to school every day, we pick them up from school, and we make sure they know this isn’t changing their lives, this little stint in Kansas City,” Brooks says in a telephone interview, his voice raspy after three nights in concert. “When we announced our retirement, it was so we could go back and raise our children, and Sandy and I and Miss Yearwood all together are doing that. They are the priority.”.

“We’ve had fun, we’ve had a lot of fun,” says Brooks. “And it’s just crazy. You can’t get them to quit clapping in between songs. You don’t want them to stop clapping, either … they just treat me so good.”. The fans are singing with him to every song and he remains a legend. He is worth it.