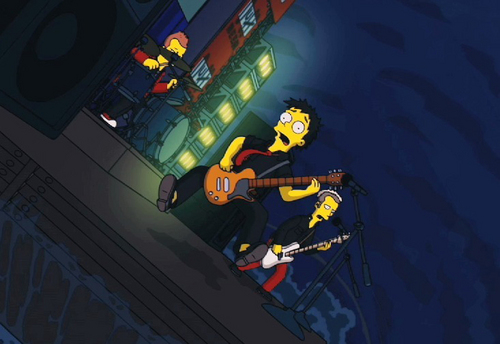 As previously reported, Green Day was set to do a punkified version of the famous theme song for one of the most popular TV shows of all time: “The Simpsons”. The The Simpsons soundtrack

was released yesterday, containing 15 tracks mastered and “baked” by orchestral composer Hans Zimmer, whom you may remember as the man who made the O.S.T for such movies as Gladiator, Pirates Of The Caribbean, Rain Man and a lot more. The [tag]Green Day[/tag] cover of Danny Elfman’s classic was released as a single, yesterday, in the form of 25,000 pink doughnut limited edition cases, which you can buy at your local Best Buy, Circuit City, Wal-Mart and Barnes & Noble.

The dudes down at Pretty Much Amazing, managed to sample a bit from the 1:23 Green Day cover, after listening it as part of a KROQ radio show. The track sounds pretty cool, but somewhat boring, the rest of the show however is hilarious, you can listen to a direct conversation between the KROQ crew and almost all the important characters from the Simpsons, from Apu to Barney to ultimately Homer.