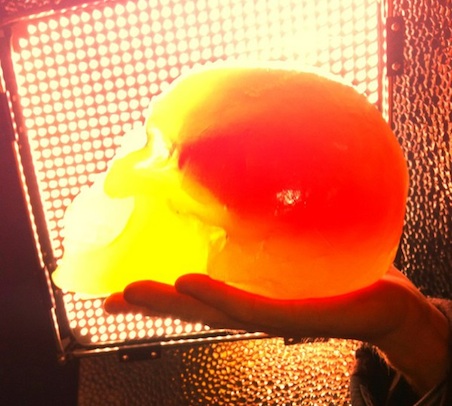 The Oklahomans are no strangers to all sort of oddball endeavors, be it their ridiculous on stage antiques or various other promotion techniques; the latest – an upcoming commercially available gummy bear skull with an equally delicious gummy bear brain in it, ultimately inside of which you’ll find a flash USB stick with three new Flaming Lips songs. Oooook…

“We found this guy in Raleigh, North Carolina, who makes all these gummy bear things– even adult toys. I don’t know if he’s making giant dicks and pussies out of gummy bears, but we called him and said, ‘Hey, would you want to make a life-size human skull with a brain in it?’ And he’s like, ‘Who is this?’ We said, ‘The Flaming Lips.’ He’s like, ‘I love you guys!’ So sometimes you’re lucky and you’ll run into someone with enthusiasm.”

The Flaming Lips have been enjoying label independence for sometime now, and their 2011 resolution is to release all kinds of new material by themselves in all kinds of innovative manners. For example, last month’s “Two Blobs Fucking” was released as twelve separate youtube videos, each comprising a different sound layer and all meant to be played simultaneously. Here’s a demo by the band itself with three iPhones made in the ladies’ room of a Chelsea rehearsal space. Crazy stuff – I love this!