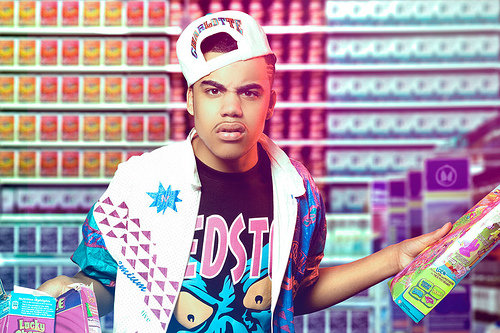 I know. 99% of the time, music journalism isn’t very helpful. It’s, at best, pretentious attempts to appear to be gripping the zeitgeist, and at worst, thinly-veiled marketing schemes disguised as a semi-cogent thought process. But I feel that here at ZME, we can be something more. An agent of virtue – a voice that’s willing to champion the good and stamp on the bad. A veritable He-Man amongst Cringers.

At the very least, we can be all editorial, all the time.

So when I got an e-mail from the PR wizards instructing me to tell you fine people about the man you see above – one Master Shortie – I decided to investigate the music before sending you fine people to discover it for yourselves. So: what did Al think of Master Shortie, and his new track, Dance Like A White Boy?

This song is either a brilliant, point-blank parody of everything that’s wrong with music today, or a damning indictment of the kind of brain-dead, intolerable dreck that the Myspace music sphere is willing to get behind and promote as being worthy of our time. I’m really hoping it’s some joke I’ve not been let in on, but I don’t think it is. From his Wikipedia page:

Which, with the help of intense Myspace plugging (Shortie was on the site every day, interacting with his fans) and a home-made video for ‘Rope Chain’ on YouTube, turned Shortie from a child star of the commercial West End into the hottest underground alternative hip-hop act in the country.

So, go check out the video. If it’s not as bad as I say it is, and I’m missing some key factor that makes it a work of near-genius, please tell me. Because I wanna know why this exists. Is Mister Master actually worthy of me writing thinly-veiled marketing schemes disguised as a semi-cogent thought process?