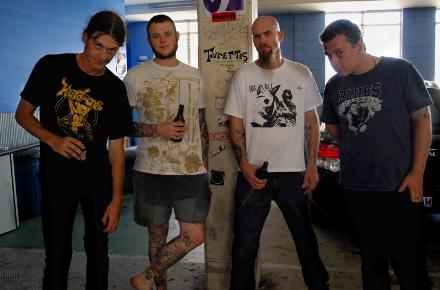 Josh Homme and Nick Oliveri! Now that was a sight back in the ol’ Queens of the Stone Age glory days, not to mention the Kyuss era, when these two giants of rock would simply plummet pure riffage across the stage and audience. In somewhat antagonistic positions, Oliveri and Homme were like brothers until unfortunate circumstances, well to known and deplorable to mention here, broke the two apart. QOTSA survived under Homme’s solitary rule, not only that, but the band flourished releasing two more well received banging albums, as well as gigs at most important festivals in the world. Besides QOTSA, Homme also endeavored in numerous successful side projects like Eagles of Death Metal or last year’s supergroup sensation Them Crooked Vultures, besides production work for Arctic Monkeys, Biffy Clyro or Mastodon. In the light of all this, Oliveri was eclipsed, fading into obscurity as no release of note came from his side – nothing but mediocre post-punk rubbish.

This year Oliveri and his beloved Mondo Generator are set to release a new album, one much awaited by the punk-rock demigod’s fans, as is the case with every MG release to be honest, before the disappointment upon the delivery sets in, that is. Mondo Generator’s new album, called “Time To Destroy, will be out at the end of the summer, and a first glimpse is the band’s upcoming single “Dog Food”. The upcoming Oliveri endevour is set to feature some of his pals like Dave Grohl (you can hear him on the kit of “Dog Food” ), Happy Tom (Turbonegro) and Marc Diamond (The Dwarves). Contrary to my predictions, “Dog Food” is pretty awesome. A party starter song, filled with angry chords and beats – it’s got Oliveri written all over it. The single will be out August 10th.

Listen to the new single Dog Food, as well as it’s B side, the Irish whiskey brawler “Sam Hall”, as sung by Oliveri, all on his MYSPACE.  US tour dates right after the jump.