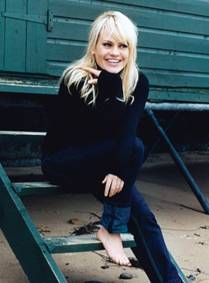 Aimee Anne Duffy, more known after her stage name of Duffy, is a Welsh soul singer, that’s been getting a lot of attention, thanks to her impressive vocals. Her sound reminisces a sweet era of music, when music was a way of life, but with a modern touch, thus resulting in a interesting eclectic mix of retro and contemporary music. She began songwriting at the tender age of 10, influenced by artists who’s music raised her: Doris Duke, Bettye Swann, Scott Walker and Richard Hawley.

The last two years were spent writing and recording her debut album “Rockferry,” an album packed with personality and charisma. Highlights include the defiantly catchy “Mercy” – haunted by the ghost of Mowtown – “Warwick Avenue” with its white-knuckle grip and the razor-sharp hook of “Serious. Backed by a band of six musicians, Sgt Meadows, Ben. E., Greeno, Mr T, Ayo & Karlos, Duffy’s sound is both nostalgic and timeless.

“We didn’t have any record stores in my town – I just instinctively knew what I wanted to do. Somebody coming from Wales to the city I’ve had a lot to deal with, so for me this album is about a journey. We took two years to get the process right, and I think that’s what we’ve done,” she explains.