After nearly 24 years of disbandment,  The Cars are back.  Move Like This certainly must have been a feat for this throwback group due to the death of original bassist and lead singer Benjamin Orr in 2000; however, to the average listener, it seems the band has barely changed.

Who are/were the Cars? Any 1980s pop-rock enthusiast or vintage vinyl collector would easily identify the Cars, comprised of Ric Ocasek, Benjamin Orr (Orzechowski), Greg Hawkes, David Robinson, and Elliot Easton, as a band on the cutting-edge of new wave music in their breakout era; their first release, The Cars, a work published in and distinguishable to 1978, was only the first in a line of critic-pleasing albums. This line, however, was a turbulent one; the band members frequently took breaks, which eventually led to their disbandment after Door to Door (1987)  in 1988.

Since then, the fragments of the band have been touring in support of solo careers and various other side-projects, but have managed to remain relatively far out of the limelight. Needless to say, the sensation that had been the Cars had simmered down within the first few years that they were unresponsive; thus, Move Like This took fans by complete surprise.

Although Ric Ocasek, when asked in 1997, told a reporter that the Cars would “never” get back together, the band managed to have a successful reunion in late 2010, which ultimately resulted in a kindling of their old flame; Ocasek himself admitted he was “amazed at how we clicked when we got back together”. Due to their refusal to replace Orr with any new outsider, Ocasek has taken over all lead vocal duties and no new bassist has been taken into the group. 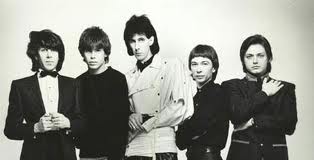 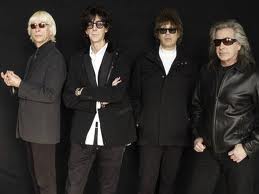 Move Like This can only be described as a trip through time; the Cars, as I have said before, seem relatively unchanged, although they lack Orr’s thick vocals.  The prodding of the synthesizer throughout each track and the addition of Ocasek’s own pungent vocals fills the void, however, and reminds the listener of that classic Cars sound.

Though they have remained fairly static throughout their hiatus, some hints of modernization can be detected on the main tracks of the album, “Blue Tip” and “Sad Song”. That being said, their overall Move Like This sound is comparable to that of early Franz Ferdinand work, although the Cars are much more processed than the young rockers from Glasgow.

This band is anything but frumpy and outdated, however. After 24 long years, the band has managed to keep in tune and let the good times roll; this time, the good times roll on for an entirely new generation of potential listeners.

I’d give it a listen, especially if you are looking for more 80s-esque bands in our all-too-modern era.