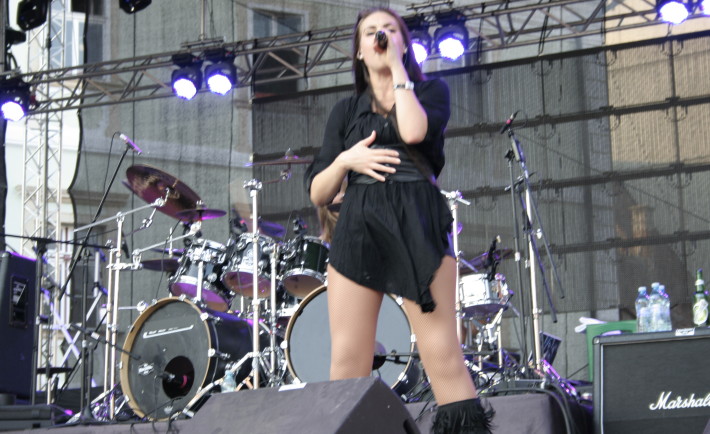 It’s already been 8 years since the goth festival is rocking the heart of Transylvania! The warm and lively audience has been met with great performances every single time, and this year was no exception – with bands such as Within Temptation, Lacrimosa and Haggard – this is no surprise.

The Artmania festival is not only about the music – before the big concerts start, it features a week full of cultural activities, everything from movies to medieval exhibits and Harley Davidson parades. During these first days, we had the perfect period of accomodation with the city and the great local beer. But when it’s all said and done, we came for the music.

It was dreadfully hot in Sibiu as the crowd started gathering for the first act of the day – Amaranthe. The Scandinavian band charmed us since they came on stage; well, Elyze Rid sure did. 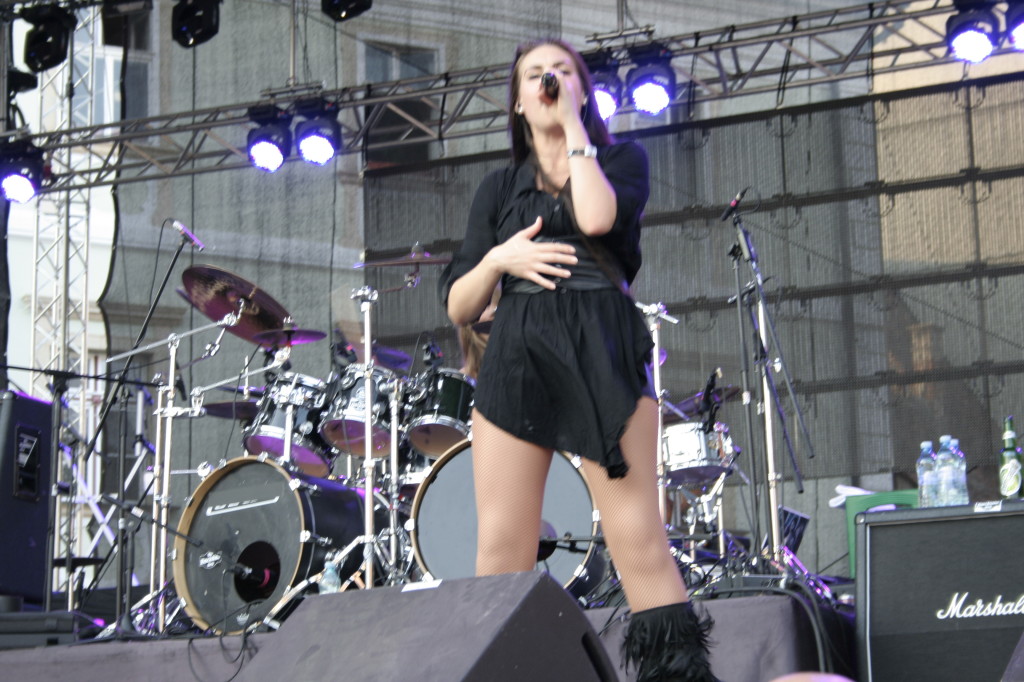 She’s been hanging out in metal for a few years now, after doing backup vocals for Kamelot, and it shows – she just owned the stage. I wasn’t really that thrilled to see them, but Amaranthe is just one of those bands which sounds better live; they managed to blend in metalcore growling with melodic metal, and even some pop influences (which were not really up my alley, but they sounded ok). It was surprising to see the crowd singing along to almost all the songs, but that just made it better. All in all, my feeling towards Amaranthe have gone from ‘meh’ to ‘hey, these guys are actually pretty good’. I don’t really understand why they need 3 singers but hey – it gets the job done. 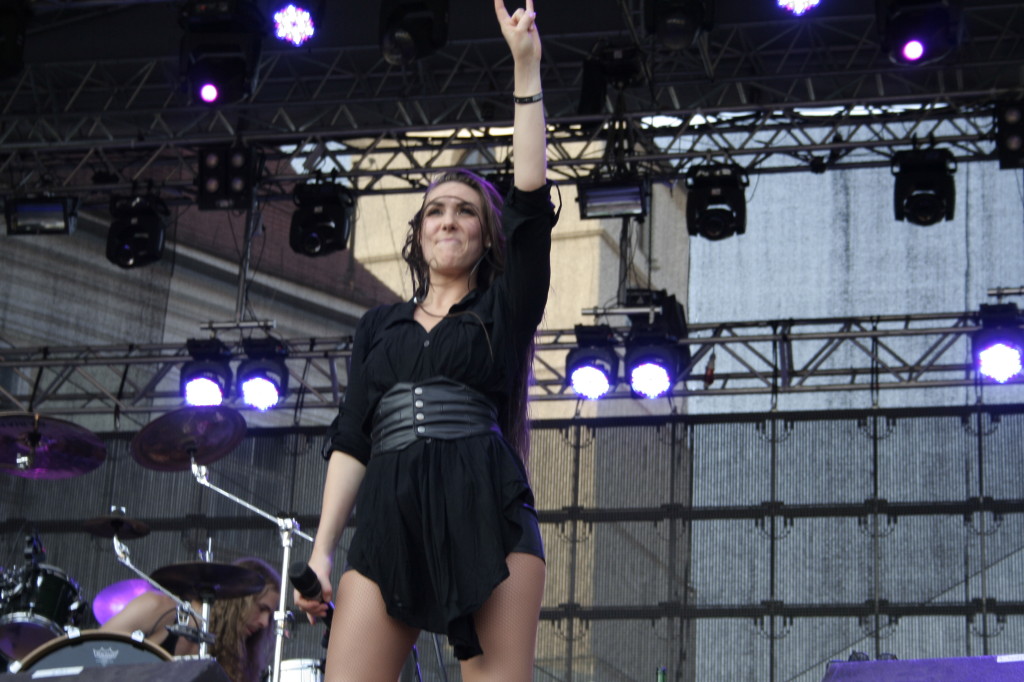 But when Haggard took the stage, it all changed – the neo-classical metal group takes everything to the whole new level, and you can’t talk about Haggard without setting the stage. Aside from Asis Nasseri, the songwriter and brain behind the band, you have the Susanne Ehlers with vocals and 10 other very talented musicians on stage. The dozen delivered a dazzling performance, with instruments ranging from electric guitar and bass, to violin, viola, keyboards, bass, flute and even an oboe. The fascinating thing was just how well they all sounded together, every single note from every single instrument blending with the others in a dazzling display of musical prowess. 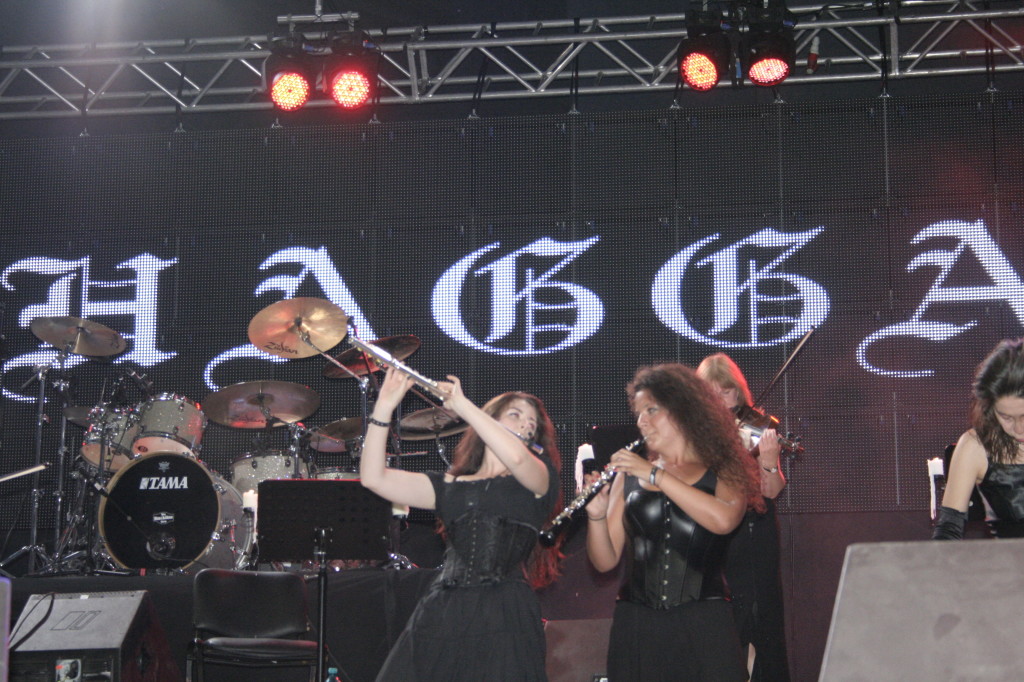 Starting out with Tales of Ithiria, the song that gives the name of the album, continuing with classics of the genre – Per Aspera ad Astra, Awaking the Centuries, Upon Fallen Autumn Leaves, and, of course, Eppur si Muove. 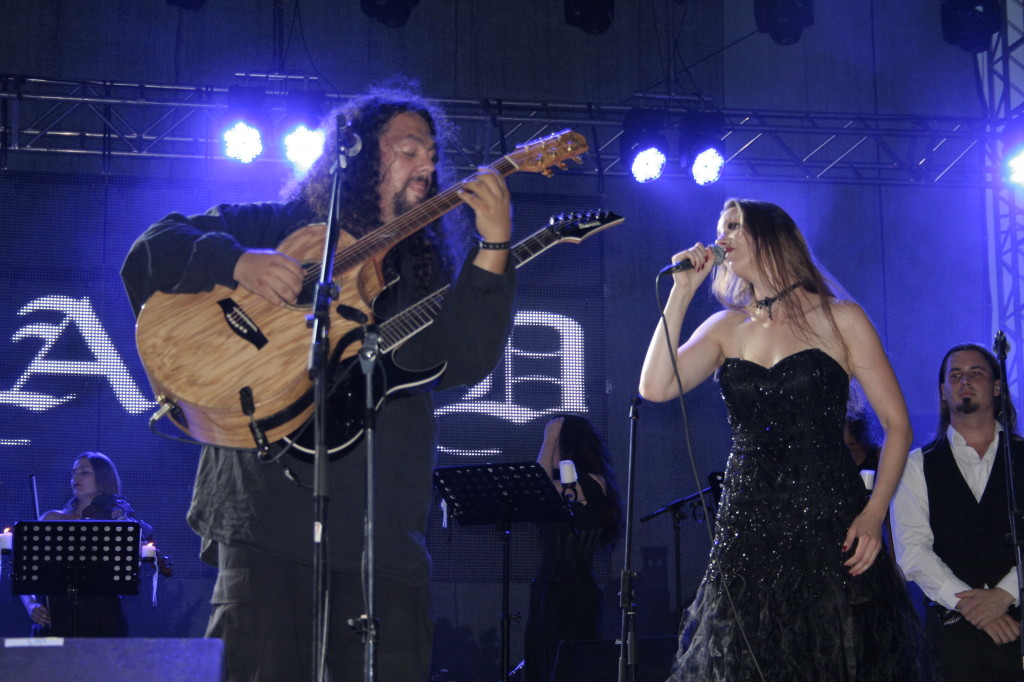 Haggard is simply more than music – it’s an entire experience; half of the time I didn’t even know where to look. The candles were burning, hot wax dripping next to the notes for the violin, the flute play which you so rarely get to see, the oboe play which you almost never get to see, the electric guitar tearing it up, the Norse god-ish cello player – a gothic, ethereal dream. 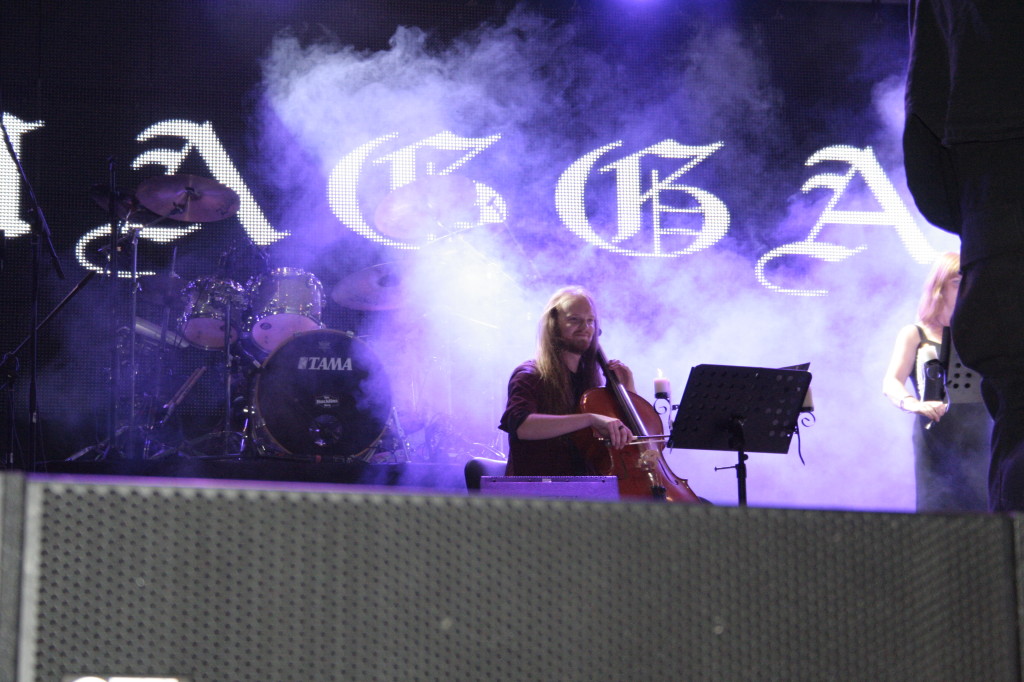 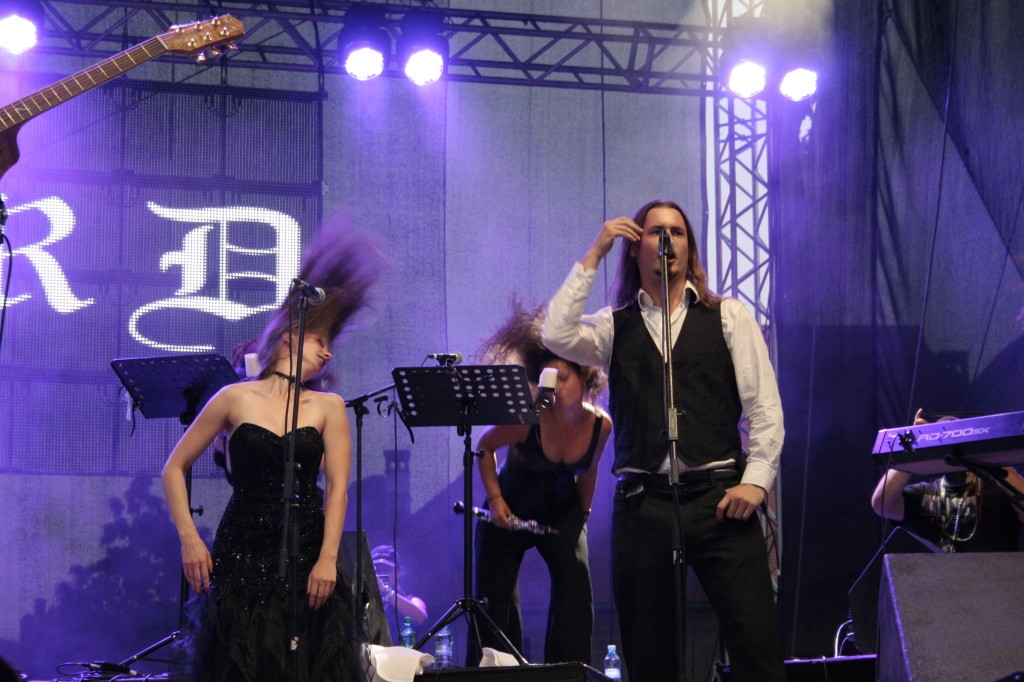 The highlight of their concert though was still Herr Mannelig, with stunning vocals from Susanne Ehlers accompanied by a frantic crowd. 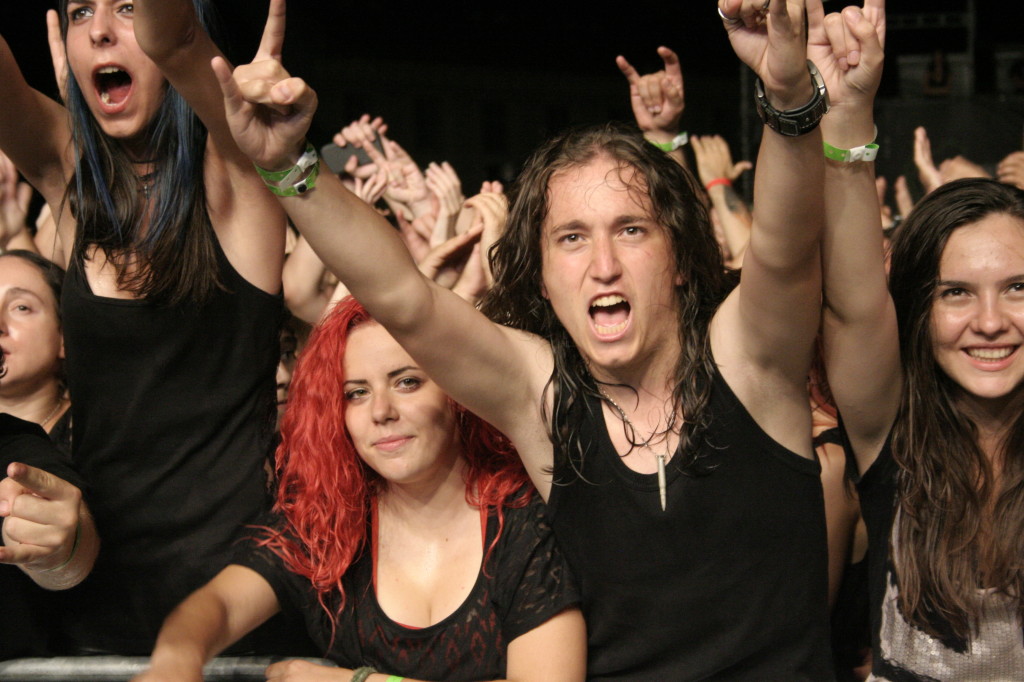 Finally, after the sun et sand the unbearable heat was done, it was time for Within Temptation. After the release of The Heart of Everything in 2007, their music took a different turn, which lost them some long time fans, but also won them some new ones; they started singing more “MTV music”, a genre which some would call (myself included) more shallow and commercial. Still, their concerts are awesome, always accompanied by short films, the usual light show and, of course, Sharon is always wonderful. 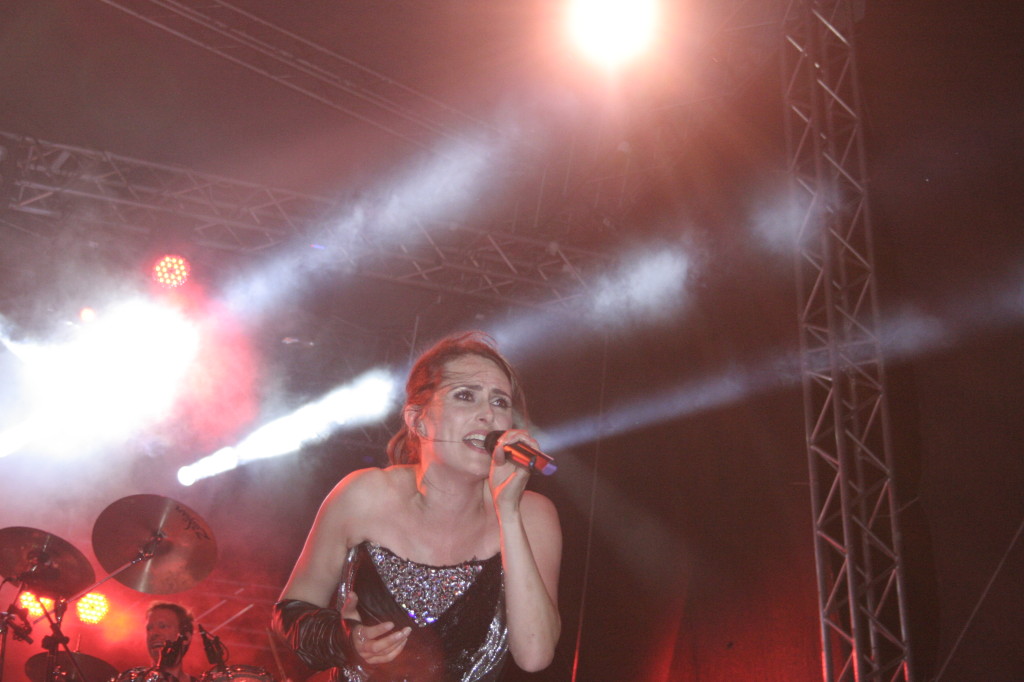 Running all over the stage in her short skirt, she just tore it up from the first song to the last. Probably forgetting where they are, Within Temptation started out with 3 pop-ish songs from The Howling, and it was only when they started singing from their older songs that the crowd really went wild. 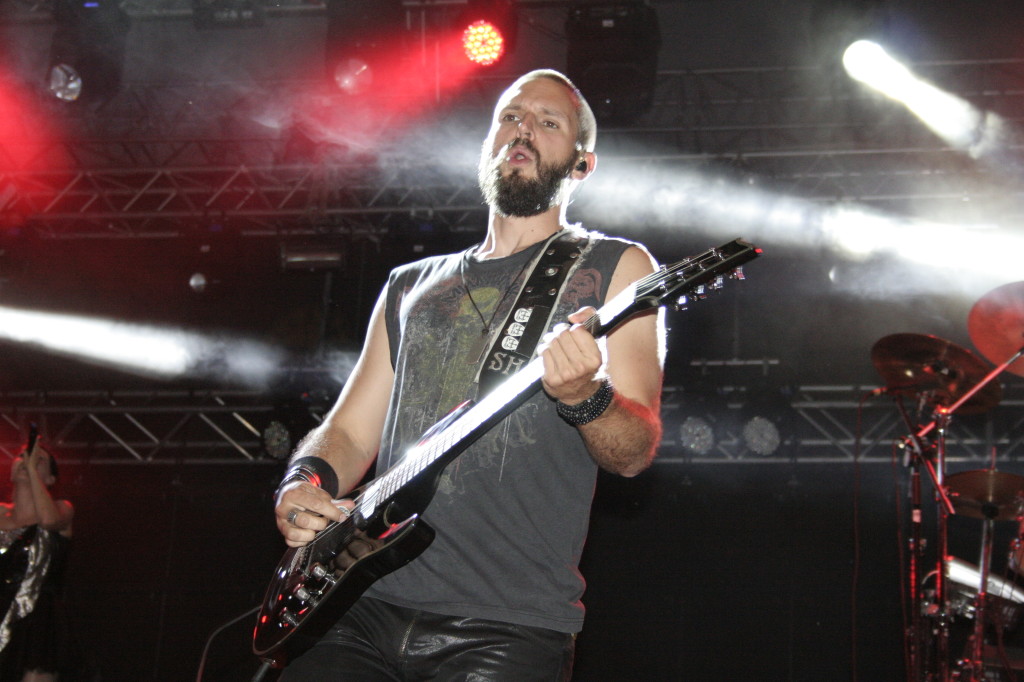 Ice Queen, Mother Earth, and See Who I am helped us remember we’re at a metal festival; it was the second time Within Temptation headlined in Sibiu, after 2008, and speaking to some of the people there, it’s clear that it was worth the wait. The voice, the guitar, the lights, everything sounded marvelous, and it’s impossible to pick the best track. Though one thing’s for sure, judging by the crowd’s reaction and my own feelings – the old Within was oh so much better than the new one! Really guys, we know there’s more money and people in pop and electro, but we miss you! 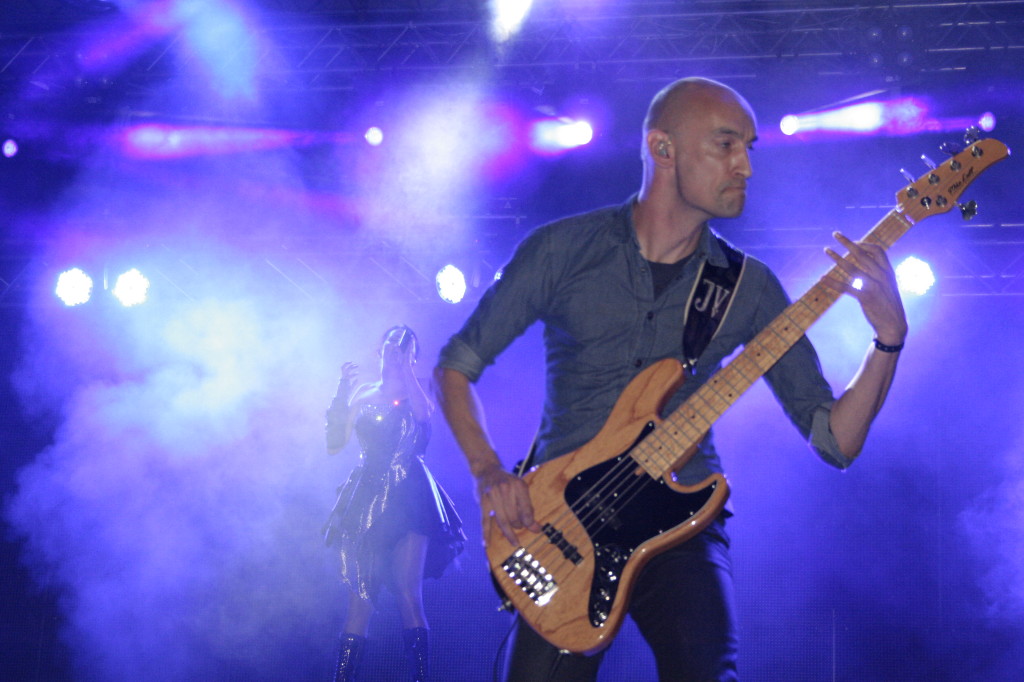 Finally the last day came with some of my all time favorite bands. There was a surprisingly good event in the Small Square, where some really good local bands performed: Coma and Omul cu Sobolani (Rat Man). We really enjoyed their acts, but because they were planned so early, it was incredbly hot, and we needed to save our energy for the concerts from the Big Square. It was already kind of gloomy, and by the end of the concerts it was actually raining cats and dogs. 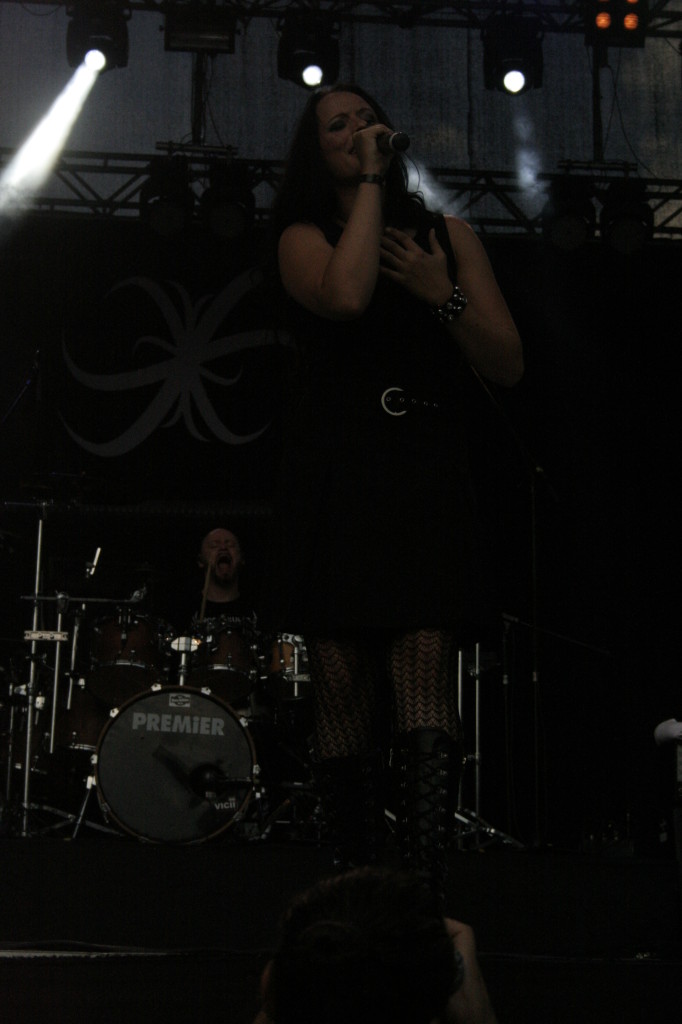 The concert from the Big Square started with the German electro-symphonic-metal (something along those lines) – Xandria. They kind of impressed me, I haven’t been to a Xandria concert before, but I have been listening to their music since they were singing with Lisa Middelhauve as the band’s frontwoman, and I have to say that they had a really good sound on the stage. Manuela Kraller, which is the band’s singer only since 2010 did a really great job, actually I have to say that her voice kind of changed the band’s original style. When they took the stage they really surprised me, I was expecting something more melodic and symphonic, but this was a lot more metal than I’ve imagined. They really rocked the stage, and just like the first day, the first band was definitely the pleasant surprise. 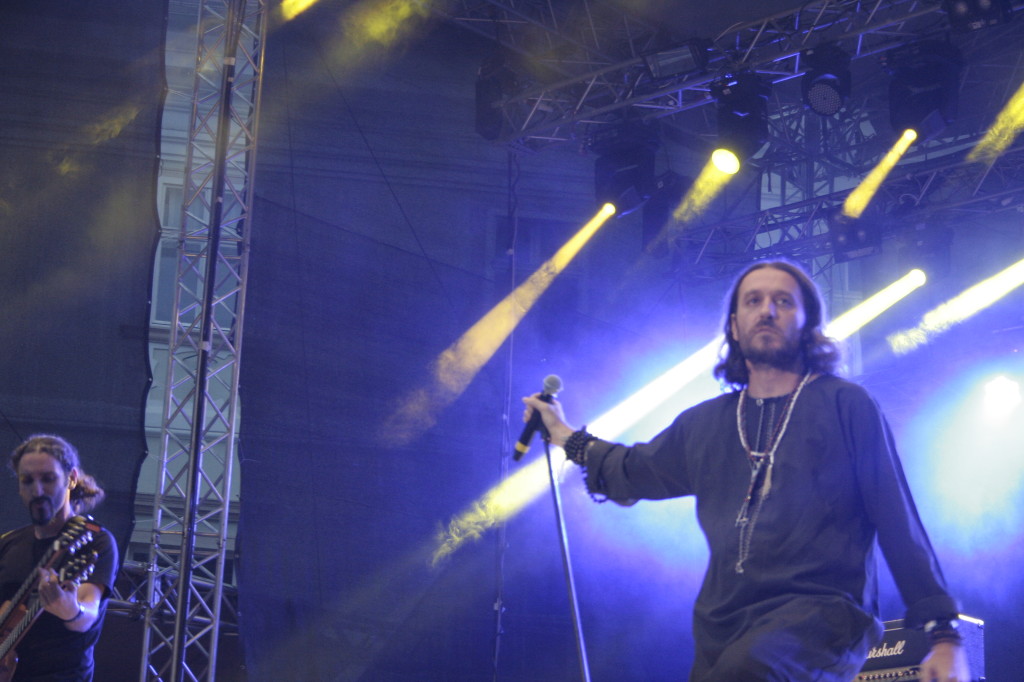 The second band was Orphaned Land, which is not really up my alley; not to say that they didn’t play good or anything like that, but Oriental heavy metal is just… I don’t know, it sounds funny. So the band is something like Israeli progressive metal, but after watching them live, my opinion is that they sing something more like some metal with oriental music and I can sense a little bit of Serj Tankian’s vibe there, as well as traditional influences. 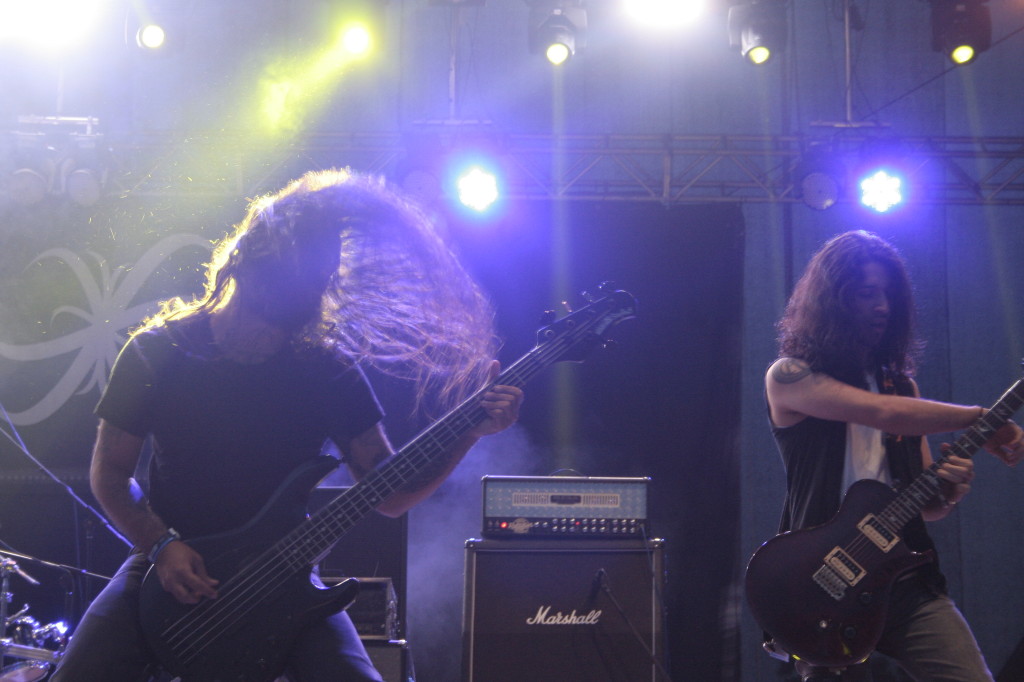 Kobi Farhi, the band’s frontman actually looks like Jesus, and in the middle of the concert he said something like: I know that I may look like Jesus, but I’m not – really? Shocking news. They were kind of fun on the stage, but I don’t think I’ll be listening to their music any time soon – though I may like to see another concert with them. If I could catch the lyrics, that would probably change a lot – I’m sure they’re quite meaningful, but metal and oriental music in a foreign language… is just a little too out there for me. 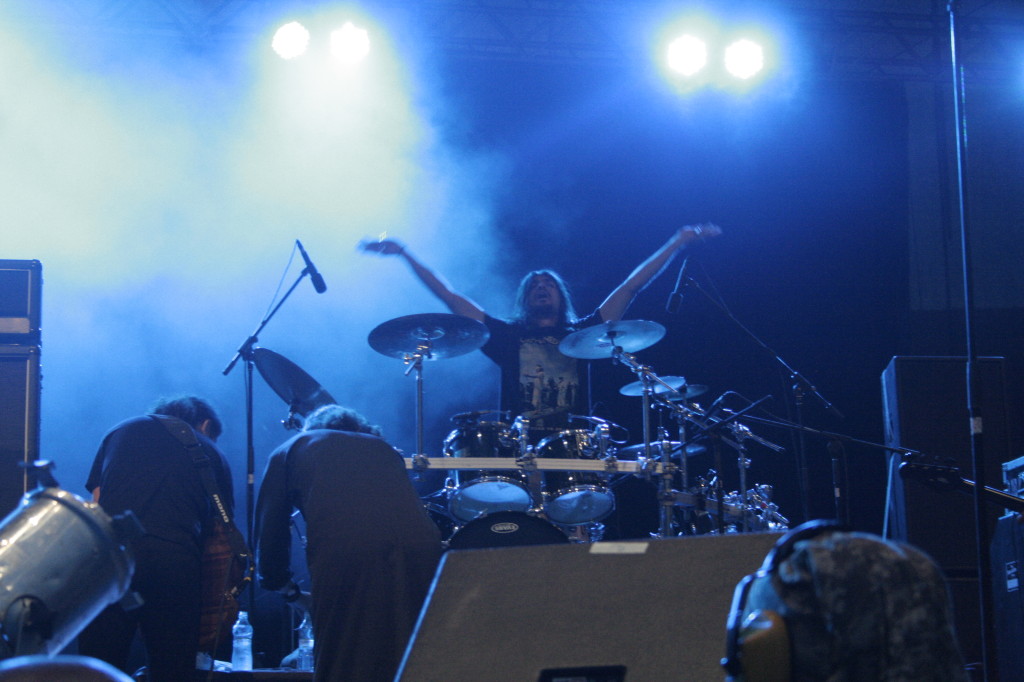 The last band was, Lacrimosa, one of my all time favorite bands – as well as half the people there. This concert was just a little bit magical, and not just because I love them, but before they started to sing it actually started to rain really heavy and with all that effects from the stage, you can’t even imagine how cool that was. Another thing that I liked about this concert, was that they actually sang a lot of songs from almost all their albums: Alleine zu Zweit, Verloren and Revolution from their latest album Revolution(2012), Ich bin der brennende Komet, Der Morgen Danach, Stolzes Herz, and many many others. The sound was perfect, what I didn’t like though it was Anne Nurmi’s voice, I don’t know what hapend to her but that performance was not one of her best. All in all, this was a really great concert, and at the end of the concert, it was raining so hard that I could have bet that it was part of the special effects only to introduce us to the dark gothic side of the Lacrimosa experience. 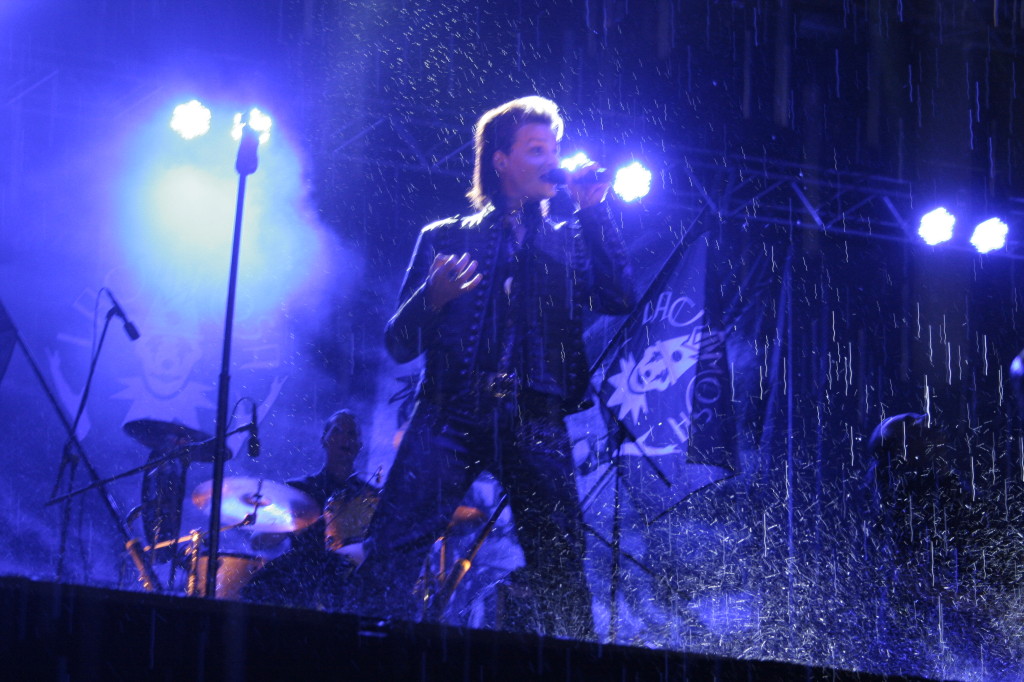 The festival was great, I mean the bands and the sound was really great, I was pleasantly surprised by the festival, the only downside was that it was dreadfully hot. Still, judging how it’s been in the past few years, I have to say I expected a little more out of the public – a little more goth, that is. You couldn’t really see the goth fashion and spirit there, but all that was compensated by the contagious energy of the public from the front of the stage. 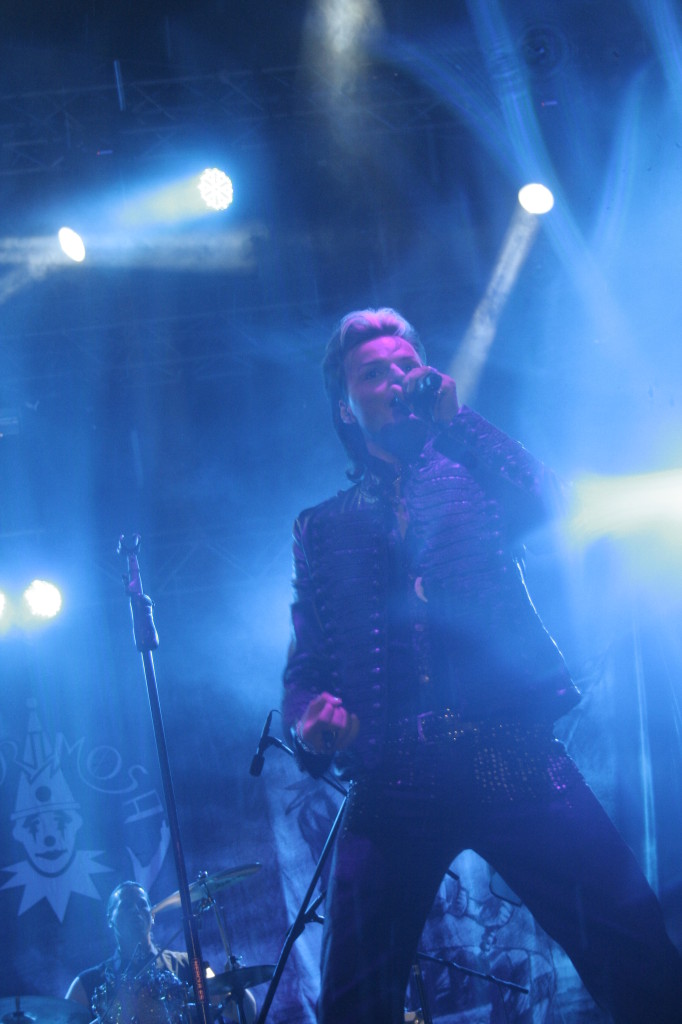 All in all, in the heart of Transylvania, in a marvelous city, with great bands, both newcomers and veterans, Artmania is a festival you definitely want to mark on your calendar – and 2013 was a great year.