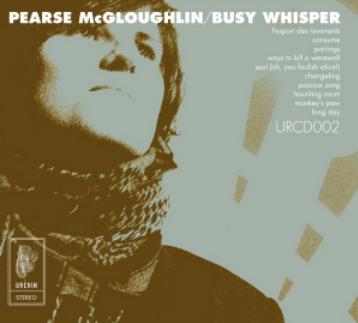 Pearse McGloughlin is a Sligo-born songwriter and musician, who served his time in a series of bands before deciding to fly it solo – taking in many locations along the way. Spells in Dublin, London, Canada and France have no doubt shaped his broad musical talents and acute observational lyrics, and with “Busy Whisper”, he has produced a perceptive and powerful debut that is sure to take him to many more far-flung destinations.

This troubadour is by no means trying to reinvent the wheel, but he is certainly able to take it in a different direction. Any followers of the Irish music scene won’t need to be told of the singer-songwriter epidemic that is sweeping across the country and, in all likelihood, probably won’t want to hear another one. But with the exciting potential coming off this album, they should be all ears.

Critics and national radio stations have been in high acclaim of McGloughlin’s polished, silken voice and reflective musings, and as much as this is his most appealing strong point, never does he rely on this ability alone; a broad musical awareness and instrumental variety have also added to his arresting and haunting sound. The opener, “L’espoir Des Revenants” is the perfect introduction for setting the tone, gently lifting you up and taking you away on the musical journey.

The production behind the songs (a big thumbs-up should be given to mix engineers Andy Knightley and Karl Odlum) blends perfectly with McGloughlin’s smooth vocals. Throughout the beautifully crafted “Partings”, “Saul (Oh, you foolish Alice)” and – among the most lyrically-poignant – “Changeling”, it’s a smooth ride all the way.

Although, it must be said, it can get a little too smooth after time. As much as each song is worthy of its place on the record, there can be desires to be on a bumpier road. Things don’t really get going until the jam-it-out end of “Passion Song” and by then – after the halfway mark – it could be far too late for some. This would be a real shame considering what treats lie in the store within the remaining three tracks; the piano on “Long Day” is wonderfully apt for a closing number.

If “Busy Whisper” loses marks for its dynamic range, it is a true triumph in every other category. McGloughlin could well be the needle in the hay stack we have been waiting so long to find and this is certainly a masterful and learned voice that deserves to be heard.