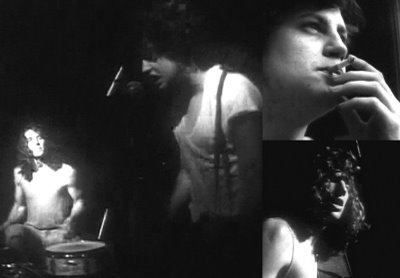 The rockabilly duo that formed the ’80s cult act Flat Duo Jets is clearly one of the most underrated bands in rock’n’roll history. The blue-garage duo paved the way for similar bands and influenced a great deal of artists through out the ’90 and 2000’s like R.E.M. or Catpower or the most clear example The White Stripes. Sadly the band disbanded in the late ’90s, but fans can finally rejoice at hearing new material from the band as the release of Two Headed Cow, the soundtrack to the 2006 documentary of the same name, has just recently been announced. The disc contains seventeen unreleased tracks recorded in 1986, ranging from early FDJ favorites (“My Life, My Love”, “Mexicali Baby”) to jaw dropping cover tunes (The Collins Kids’ “Hoy Hoy”, Ray Charles’ “Mary Ann”). Rawhide is my favorite from the bunch, a scorching neutron bomb of demoniacally energetic rockabilly that detonates on impact leaving nothing but scorched earth for miles around.