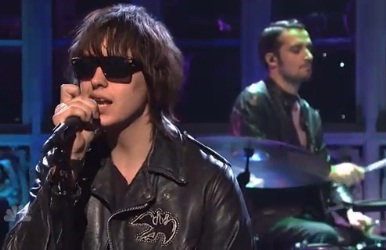 This Saturday the NYC garage re-revivalists returned to SNL as part of their third live appearance on the show, where they played two tracks promoting the new upcoming album, “Angles”. The band first kicked off their two song performance with the record’s lead single “Under Cover of Darkness“, a mediocre performance for an otherwise equally mediocre song, before continuing with a The Police cover of “Life is Simple in the Moonlight“, where they actually took the cake. I like Julian’s shades and the band’s overall rock star persona, however is it just me or were The Strokes a bit weary? I really miss the energy the band used to have in 2002 on singles like Last Nite.

Alright, for those of you who’ve missed Saturday’s SNL, we’ve got videos of the two songs below.

The Strokes – Under Cover of Darkness

The Strokes – Life is Simple in the Moonlight

The Strokes’ forth studio release, Angles, is out March 18 on RCA/Rought Trade.