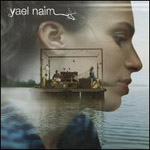 There’s been a entire frenzy lately with Apple’s latest gadget: the Macbook Air and as it’s almost always the case with Apple ads, the artists featured on them get a heck load of attention. Yael Naim, untill now a anonymous French/Israeli singer, is the latest artists to have one of her songs featured on one of Steve Jobs’ ads, as her now notorious “New Hope” became the soundtrack for the official Macbook Air ad, joining the likes of Feist, Jet, CSS or even Bob Dylan, who’ve already had a taste of the benefits that come with mainstream advertisement. And if you’ve found the 30 second ad quite delightful, you’re in for a treat my friend. Wait till you hear the whole thing, meaning Yael’s entire self-titled sophomore album.

When I first heard her voice, obviously in that damned Macbook ad, I was a bit amazed by her beautiful, soft, a bit trembling voice. At fist I though it was Feist (once is enough baby), but the accent soon convinced me that was not the case. A bit of googling around for the lyrics and I soon found out Yael Naim, a Israeli, now Paris based songbird was behind it. Her background is as much mysterious as it is complicated. Born in Israel to Tunisian parents, she’s shown musical inclinations from a tender age, passionately playing classical music, Yael’s a conservatory graduate, until she fell in love with The Beatles and Jodi Mitchell. Her perceptions over music have since then changed, radically. She played in a few jazz clubs around Israel at first, before she was obliged by the Israeli state to serve in the army. Two years in the army didn’t discourage her at all and she soon moved to Paris to start a musical career.

Actually after, the obvious slump that characterized her debut album, it’s a miracle Yael managed to pull herself to make this second one. It’s a dream I almost gave up on along the way,” confessed the talented French singer, speaking about the conception of her eponymous release, that took over two years to complete. A great deal of credit towards the album’s success has to go its producer as well, multi-instrumentalist David Donatien, without who the album would’ve undoubtedly be forgotten in the darkness of anonymity’s shadow.

The opener “Paris” is a beautifully Hebrew sung ballad, with a dash of French, that makes you feel like you’re under the Eiffel Tower or strolling along the Champs Elysees, as Naim calmly sings against a wall of strummed guitar and a haunting lap steel. “New Soul,” the obvious stand out track, is the most up beat and feel good song off the album, probably because it uses more then just the usual 1-2 instruments, like the much welcomed percussions. You’d expect Yael Naim to be the last person to cover Britney Spears’ signature song “Toxic,” but just as surprising it sounds pretty good. I like it a lot because the covered slipped away by a long shot from the mainstream pop patterns and Yael, making use of her signature voice and style, managed to make it her own, turning it 180 degrees.

The album totals 13 tracks sung in three different languages French, Hebrew and English. I find the linguistic diversity quite refreshing and soothing, maybe due to that cute little accent of hers. If I had to choose a word to describe the whole record, I’d definitely pick “lovely.” It’s certainly not innovative or anything like that, but it’s very fun and extremely catchy. Moreover it proves once again the power that something as simple as a TV ad can posses. Care to place bets who’s the next artist that gets catapulted into mainstream success thanks to a iPod ad?