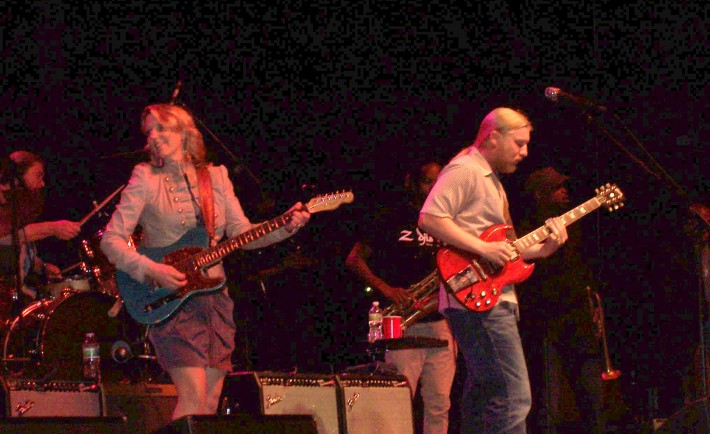 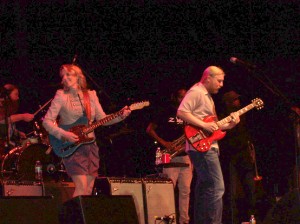 The Tedeschi Trucks band rolled their tour into Boston on a perfect 75 degree evening. The sunset over Boston highlighted the evening with a beautiful array of colors that made the night just that much nicer. When Susan Tedeschi walked onto stage with her husband Derek Trucks not far behind, the entire venue cheered them on. The additional nine members of the band took their place up on stage and immediately launched the Pavilion into a stunning array of musical happiness. Susan’s vocals sounded like a soft ballad that twisted blues, with funk, and everything in between. Derek played masterfully on slide guitar stretching every note and reaching incredible heights with numerous songs from the newly released “Revelator” album.

Without any doubt the nine other members for Trucks and Tedeschi had everyone off their seats and dancing. The brothers Oteil on bass and Kofi Burbridge flautist and keyboards were playing alongside of each on the left side of the stage and across the stage was the horn section. This included Kebbi Williams on saxophone, Maurice Brown on trumpet and Saunders Sermons playing trombone. Harmony vocals were performed by Mark Rivers and the amazing Mike Mattison whose voice is something that was made of blues legends. Each member had a chance to perform a solo and thinking back, each one could have been the headliner. The audience couldn’t get enough of the blues driving music, sweet soul, and pure funky funk! Covering Uptight (Everything`s Alright) by Stevie Wonder along with Bound for Glory from Revelator were only two of the many highlights in the show.

The Tedeschi Trucks Band may be coming to your neighborhood and I suggest you open the wallet, enjoy yourself, and catch one of the best live shows around. This is pure inspirational music that can bring a soul to rest. October 15th is coming up soon and this is where you can find the Tedeschi Trucks Band playing at the Lynn Auditorium in Lynn, Mass, along with me and many other fans.